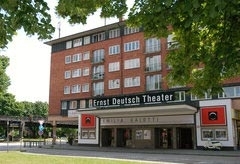 Ernst Deutsch Theatre's production was the very first stage performance of Autumn Sonata. Bergman hesitated but finally gave his permission as long as the part of Charlotte Andergast was played by Judy Winter, whose performance had "an intensitety that took the breath out of" at least one of the critics. Imke Trommler was equally praised in her small, but impressive role. Most reviewers found three and a half hours too long for a play, not least since the film tells the same story in two hours less.