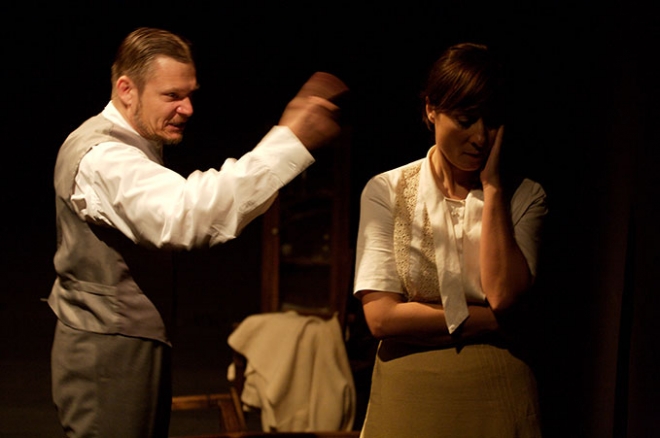 "A theatre no longer performed (in our country!) today. Intimate, with polished dialogues, carefully prepared mutual reactions for the smallest gestures, characters built up from the inside."
Tomasz Mocicki in Odra

Rozmowy poufne' ('Confidential conversations') staged by the Slowacki Theatre in Kraków is an attempt in ascetic and refined play. The portrait of Anna adds to the collection of the most interesting women characters of Bergman's plays and movies, and Dominika Bednarczyk, playing Anna's part, is in no way inferior to the most outstanding among the master's actresses. [...] For Iwona Kempa has produced a performance with sheer style almost unheard of nowadays, and based on pure emotion at that.

A theatre no longer performed (in our country!) today. Intimate, with polished dialogues, carefully prepared mutual reactions for the smallest gestures, characters built up from the inside  from the acting core, the opposite of gag festivals and 'the actor's own truth' enforced by ungifted artists and their court reviewers. [...] The great role of Tomasz Miêdzik as the pastor, the terrific as usual, by the way Sawomir Maciejewski, a star from Toruñ, but most of all Dominika Bednarzyk, whose development as an actress I have been observing with great pleasure and hope for a few years.

Bitter Bergman in an excellent stage adaptation by Iwona Kempa. The world stage premiere of Bergmans scenario is intimate theatre. Raptly attentive to the actor, focused on psychological nuances. [...] A signature role of Dominika Bednarczyk!

Iwona Kempa directed a play about infinite confession. It's a performance about small misdeeds and their serious consequences, about the courage to acknowledge one's own life failure and the bitter consent to persist in hypocrisy. Pure and wise theatre. One of the most interesting plays in the repertoire of The Juliusz Słowacki Theatre in the last years. Perhaps the most engaging one.

Tales spun so clearly are rarely if at all performed in the Polish theatre. One won't find such bitter-ending stories there either. What is the result then? In a few (eight?) scenic dialogues, in one hour forty minutes worth of confession-conversations, Kempa manages to depict seven kinds of human solitude. Without grandiloquence, sobbing or pietism and hence, all the more intensely. Bednarczyk is most remarkable in her role, and accompanied by the delectable performance of the other actors.