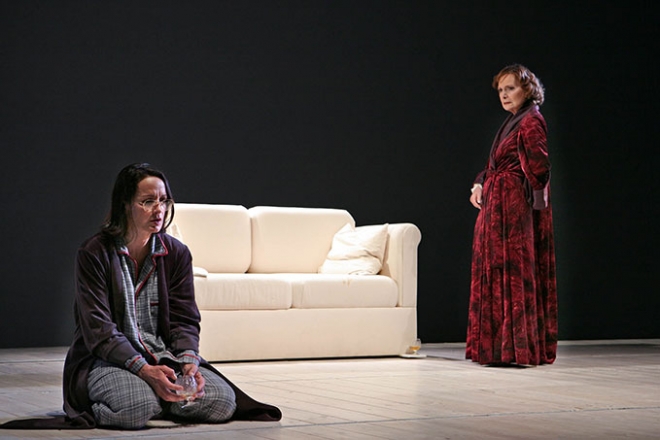 One of Italy's most famous actresses, Rossella Falk, who has starred in, among others Fellini's 8½, played the part of Charlotte in this performance of Autumn Sonata, directed by Maurizio Panici.

"The saving grace of the evening is the exclusion of the catatonic sister Helena. She never appears in person but remains a ghostly presence haunting the proceedings in the manner of Tomas' wife in Winter Light, Oskar in Fanny and Alexander, Anna in Saraband."
Michael Monkhouse

The director has chosen not to include the character of Helena in this production of Autumn Sonata. According to Michael Monkhouse, who has written a review exclusively for Ingmar Bergman.se, this contributes to one of the strongest parts of the performance: "The saving grace of the evening is the exclusion of the catatonic sister Helena. She never appears in person but remains a ghostly presence haunting the proceedings in the manner of Tomas' wife in Winter Light, Oskar in Fanny and Alexander, Anna in Saraband. It's a marvelous touch that focuses our attention on the core of the central characters and avoids the melodrama tainting the original masterpiece."

Monkhouse writes further that the director Maurizio Panici "makes admirable use of the music of Grieg - a composer whose role has always been underrated in the Bergman canon - to create a dreamily, faintly disturbing backdrop to the change of scene. And it's these changes of scene that are Panici's master-touch: no clumsy attempts at realism, just the furniture sliding left or right as we realize the drama is not located in actual space or time, it is – in the words of Panici himself – 'an area of peace or dramatic interior, where everything arises from darkness only to find itself in an empty, clear arena where the characters' bodies may find illuminating, blinding clarity [...] A ring where the two heroines and male observer debate and expand as they await necessary forgiveness'."

He is, however, not satisfied with the too theatrical parts of the performance, foremost represented by the interpretations of the two leading ladies: Maddalena Crippa and Rossella Falk.

Rodolfo di Giammarco in La Republica wrote regarding the revenue of the two leading characters: "Their re-union after many years of carelessness, represented in a worrying scene that, in the direction of Maurizio Panici, appropriately freezes, everything being empty hugs, backlight, phlegmatic sonatas. The revealing match between the two, finds sometimes, the 'magic point', invoking a sense for the actors as looked upon by Bergman himself."

In Il Resto del Carlino Sergio Colombo gave much praise to the leading actresses: "It's a new interesting, couple to follow, the one made by Rossella Falk and Maddalena Crippa. Not just because they are different; enriched by the energy of their theatrical personalities and the newborn link between them; but for their reflections and mutual consciousness which becomes congenial in capturing the atmospheres of the text.
[...]
Charlotte/Falk, who returns as a visitor and then runs away again, coming back to her world begging for forgiveness, is made with that fake, problematic absurdness with hidden fragments that the actress in those moments is unmatched in evoking: there is also a sort of trance, a secret musical fire, extracted by the character. Also astonishing, is the touching character of Eva/Crippa, who, through a sort of eastern, ascetical acting and emotional hold back, physically fades and becomes thinner: while, in the end, it's most important not be visible. This is made with a Nordic clear white, full of rear light, with the pious husband (acted by Marco Balbi), who, as in a Strindberg play, serves as the idle third pole in the devastating battle of the souls."

Enrico Groppali in Il Giornale wrote: "Carried on the stage with sensitiveness and intelligence by Maurizio Panici, the pièce abandons some 'coup de théâtre' like the meeting between the mother and the disabled daughter, to concentrate on the duel between the two rivals. Their fight in a virtuous competition is a quite unthinkable scene for the Italian theatre. There is a strong contrast between the rigid Lutheran determination of the Ibsen school that Maddalena Crippa gives to her character and a Rossella Falk, who, after looking more shining than ever in her first appearance on stage, patiently searches for the personality disorder that, in the same subject, is linked to the artist's creativity. In an awesome focus on understated tones, repressed anger and disturbing astonishment the show makes us hope there will be a changing in the theme of the tune."