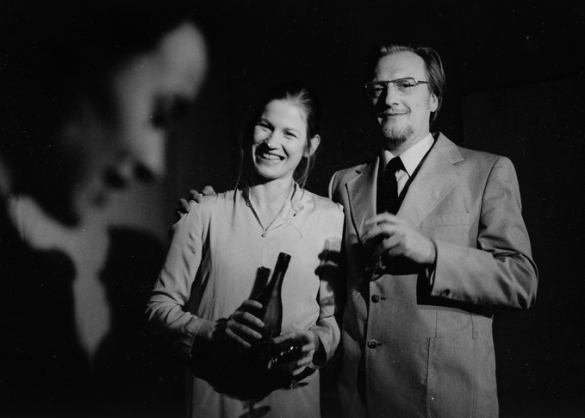 This production was the world premiere of the long version of Scenes from a Marriage.

'Content and direction that always – even when performed on stage – gets under your skin.'
Peter Burri, Kultur-Punkt

Christoph Kuhn in Tages Anzeiger thought that too much had happened since the TV version's radical handling of marriage. He found Giesing's interpretation interesting though. 'In contrast to the film where Liv Ullmann plays a liberated, ever stronger Marianne, Dörte Lyssewski's character appears fragile in the end, unsure, strained in the sex and abuse scenes, while the man, Ernst Stötzner, who benefits from her condition, does not seem as helpless as the author intended him to be.'

Rolf Glitterman's stage design consisted of a typical Scandinavian home, complete with functional IKEA furniture, and the decor, costumes and music made it clear that this was all intended to be set during the 1970s, a fact that, according to Anja Lauper in Tagblatt, was part of Giesing's mark of respect for Bergman.

The reviews praised both actors and many commented upon the fact that they were a couple in real life as well.