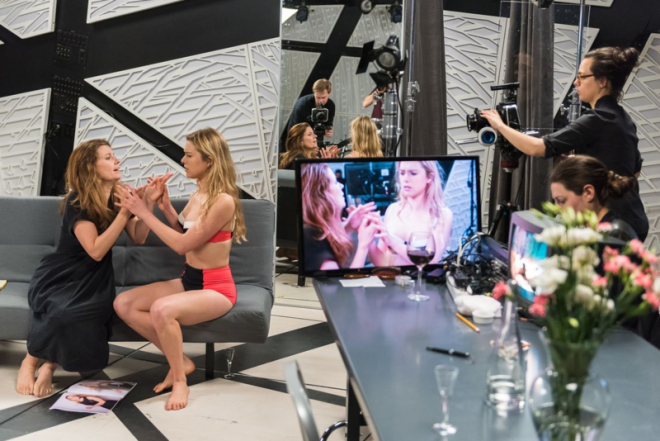 There is a soundtrack [in the film], but it’s pretty minimal. It seemed like there was space for music, and it seemed like the kind of topic music could address. Issues that would be silent in the movie can be colored by the music.
- Keeril Makan

In what is essentially a tall white box, with the small audience pressed up close against the performers, it joined with the opera and the production - directed by Mr. Scheib and featuring roving video cameras that relayed the action to four screens—to create a deliberately uncomfortable, voyeuristic experience. /…/

In the movie we sometimes glimpse a film crew hovering over Alma and Elisabet. That framing device is a central component of the opera as conceived for the intimate National Sawdust space, set up to accommodate 125 people. Long-armed cameras constantly followed the two central characters, showing them in live close-up videos on four screens.

Music comes first in any opera, and Mr. Makan’s 85-minute score, roughly as long as the film, compellingly drives the drama in “Persona.” Mr. Makan sets the text with striking sensitivity to when a moment demands conversational naturalness or supple lyricism. On the surface, the instrumental writing, scored for eight players (members of the Either/Or Ensemble), might seem like a backdrop, shifting from stretches of steady, pulsing chords to atmospheric sounds to squirrely riffs. But Mr. Makan’s acute ear for harmony and eerie textures draw you in continually.

The mezzo-soprano Amanda Crider made a winsome, vulnerable and, when the story turns dark, wildly volatile Alma, who for long stretches carries the entire opera, since Elisabet does not speak. Ms. Crider sang with deep expressivity and impressive stamina. The actress Lacey Dorn was a haunting Elisabet. Beneath her outward fragility and physical tenderness toward Alma, you sensed a disturbed yet strong-willed woman. Is the silent Elisabet an actress performing her greatest role? That’s one possible explanation.