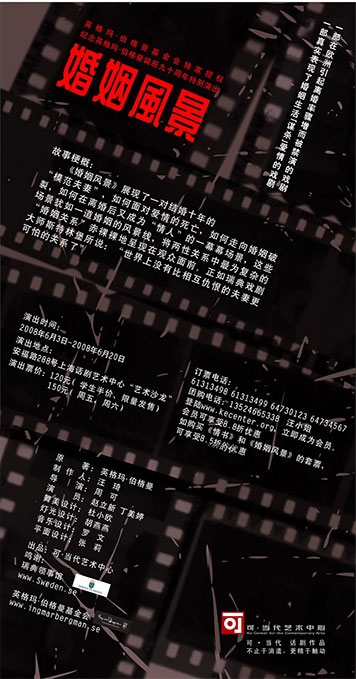 Swedish journalist Margareta Sörensson from Expressen remarked after having seen the perfromance in Beijing on the fact that the centre of the set is constituted by a sofa from Swedish furniture department store IKEA. In her review she also expresses her fascination by the fact that the Chinese version of Scenes from a Marriage made Bergman into a feminist by making Marianne the person with the initiative. Not knowing the Chinese language Sörensson however realizes that the calm, wisdom and steadiness of Marianne is superior of the distance and conformity of Johan's character.

She continues by establishing that the play shows a bourgeois milieu, where everyday problems such as economy are as absent as Johan and Marianne's children. Sörensson means that although Ingmar Bergman was criticized for this in his home country, the narrow focus makes the play as easy to move as the sofa from IKEA, so far a costly item for China's new upper middle class.

Before the premiere director Zhou Ke said about the play: "This film and miniseries were directed by Bergman in 1973. But I think many Chinese can relate to the turmoil and love that binds the couple together in the play. Through the restaging of Bergman's masterpiece, we hope that people can reflect on issues in their own marriages and cherish their current relationships".