Our mission is to administer, preserve and distribute information on Ingmar Bergman and his works. 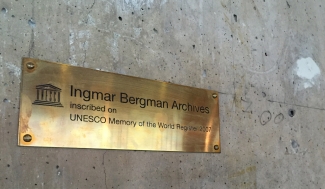 The story of the Ingmar Bergman Foundation began when Ingmar Bergman donated his archive – his life’s work – to the Swedish Film Institute, under the condition that they would be administrated by an independent foundation. And so it was that 45 moving boxes containing scripts, notebooks, sketches, photographs and letters arrived in Stockholm from Fårö, the very beginning of the Archives. Today, the Ingmar Bergman Archives consist of thousands of documents and around 10,000 letters to and from Bergman: a unique collection of material from over 60 years of continuous artistic activity. The Ingmar Bergman Archives are one of the world’s most comprehensive personal archives for an individual filmmaker, and were added to the UNESCO World Heritage List in 2007.

In addition, the Foundation owns the rights to Bergman’s scripts. If you’re interested in performing one of Bergman’s works, more information can be found here.

The Bergman Estate and Bergman Centre on Fårö

Please note that the Bergman Estate on Fårö and the Bergman Centre on Fårö are separate entities. Questions regarding their activities should be posed to the respective organisation(s).

In accord with the Deed of Gift created by Ingmar Bergman, the material in the Archives has been made available for researchers and writers of good repute. For access to the Archives, permission must first be formally granted by the Ingmar Bergman Foundation, after which the material may be studied in the Swedish Film Institute’s library. No material, including copies, may leave the premises. Additional conditions are specified in the application, which can be found here.

The Archives database - containing details on manuscripts, correspondence, production documents and more – is accessible to the public. Access to the documents themselves requires permission (see above). Start your search at ingmarbergmanarchives.se.

The Royal Dramatic Theatre (Dramaten) was established by King Gustav III in 1788. Present-day Dramaten serves as Sweden's national stage, staging classical drama, contemporary Swedish and international theatre, as well as plays for children and young adults. Ingmar Bergman served as Head of the Royal Dramatic Theatre between 1963 and 1966, and directed over 30 plays on this very stage throughout his extensive career.

Swedish Film Industry (AB Svensk Filmindustri) is Sweden's largest film production company. Founded in 1919, it takes pride in its international fame, having produced some of the most well-known films and filmmakers in the history of film, with directors such as Mauritz Stiller and Victor Sjöström, as well as boasting many internationally-acclaimed actors. AB Svensk Filmindustri produced the lion's share of Ingmar Bergman's films.

Swedish Television (SVT) has five national channels and offers international coverage. The company's mission is to provide viewers with a public service free from commercial interests. Ingmar Bergman contributed a number of his productions to SVT, including the highly-acclaimed 1973 TV series Scenes from a Marriage and numerous TV theatre productions.

Chairpeople of the Foundation, Past and Present

Åse Kleveland (2002–2007), former CEO of the Swedish Film Institute, the Ingmar Bergman Foundation came about through her initiative along with Bergman himself.

Astrid Söderbergh Widding (2007–2011), Professor of Film Studies, since 2012 she has served as the Vice-Principal of Stockholm University.