Dance of death through a glass darkly 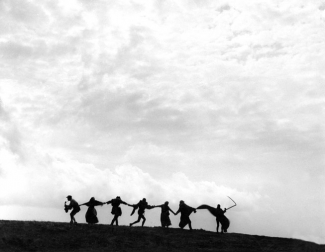 One of the most iconic Bergman images is the dance of death at the end of The Seventh Seal. Just ‘the image’, not ‘the sequence’, as the still image has been spread so far and wide that it has taken on a life of its own. And yet, there’s something fishy going on here.

We have this very image as our Facebook profile picture. Our friend Krister Collin of the Swedish Film Institute's stills archives pointed out that we – of all people! – should display the image the right way round. I had honestly never imagined that there was anything wrong with the still image, but Krister obviously knows much more about these things.

So here’s the issue: nearly all printed reproductions of the image, that is to say the still image, are displayed the wrong way round when compared to the film. (Egil Törnqvist also pointed this out in his eloquent article on Bergman and Visual Art.)

Also, as you can see, the distance between the lens and the motif is considerably longer (or, more likely, a lens with a shorter focal length was used). OK, so the publicity still that was taken to advertise the film was shot from the opposite angle, or perhaps the image was incorrectly copied. And…? , you’re thinking. Correct it in Photoshop; whatever you do, just make sure the image is printed the right way round!

But we have reached a bit of an archival dilemma. Anyone who has seen the film bears witness to the fact that the numerous reproductions of the still image are indeed incorrect. However, few people can see the original – the negative stored in the Stills Archives – as Krister can. Yet if one could, one would witness that even there, the negative is ‘the wrong way round’.

What is right and what is wrong? Well, I reckon that to the best of our knowledge[1] the still image should be printed from left to right, while the film scene is from right to left. Even the still image deserves the respect to be reproduced as the photographer envisioned it.

Here is another difficult question regarding the image credits. For the publicity still, the photographer in this case was Louis Huch. But what about a still image photographed from or extracted by some other means from the filmstrip? Gunnar Fischer was the cinematographer, but the composition, lighting, etc was set up for a moving image, not for a still pulled out of context (this is the very reason a still photographer was on set during filming in the first place). Thus, crediting Gunnar Fischer as the photographer of the abovementioned photograph is not a simple, straightforward, indisputable matter.

Well then. We shall continue to allow the dance of death to be displayed from left to right, out of respect for the original – which consequently in this case is a photographic still image, not a film sequence.

[1] Even though the negative of the still image shows death on the right, this doesn’t necessarily indicate that the image was incorrectly copied. Rather, the archived negative could be a duplicate negative which may have been incorrectly copied from the now vanished original, if this is the case. We have no idea. Neither the film nor still photographers are here for us to ask.