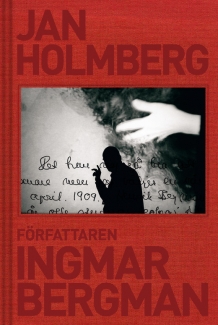 Författaren Ingmar Bergman ("Ingmar Bergman as Author") is the first book to concentrate on the writings of the highly-esteemed, world-renowned director, work which  always remained in the shadows of his theatre and film productions. For the first time ever, a light is now shown on the journey Bergman's work traversed from the writing stage to final directing – from his early years at Filmstaden labouring over manuscripts as a "house slave" to his later large-scale novels – which were overshadowed by the films bearing the same titles. Why such a duality? Did he wish to be an author all along? Why was he so hesitant to publish his writings, when he was so forthcoming and confident with his other work? Författaren Ingmar Bergman is as of yet only available in Swedish. (www.norstedts.se)

Published on 22 January 2018, Författaren Ingmar Bergman was written by Jan Holmberg, CEO of the Ingmar Bergman Foundation. A wide selection of author events will be held throughout the 2018 Year of Bergman.

6 February
“The book was better: The Hour of the Wolf in text and on screen”
Discussion with Jan Holmberg at Stockholm University