The note features a portrait of Bergman on the front (with a behind-the-scenes picture from a well-known film in the background), and a landscape of Fårö on the back, but there's more.

Once you have the note in your hand (which, incidentally, is about the right sum for a movie admission and popcorn), look closely, just below Bergman's ear. There's something written there, in microscopic text, which in translation reads as follows:

It belongs to you, the world's most precious chair. Be careful with it. It's very fragile, it breaks easily. The metal, having lived for billions of years, fiftynine thousand metres under ground, has grown weary of human beings, it easily disintegrates into dust just like the empress if you're not careful with it.

Doubtlessly, hardcore Bergman buffs out there recognised the quote from the long television version of Fanny and Alexander. And surely everyone finds the quote unbelievably apt and intelligently chosen in this context – what geniouses have worked around the clock for weeks to come up with that?

Oh, it's just the hard-working people of the Ingmar Bergman Foundation.

And if you thought that quote was well-found, take a closer look further down to the right: 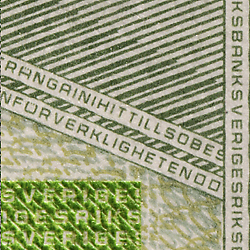 Because I know that with the help of cinema, we can enter into hitherto unknown worlds, realities beyond reality.

Pretty clever quote that one as well, if we may be so bold.