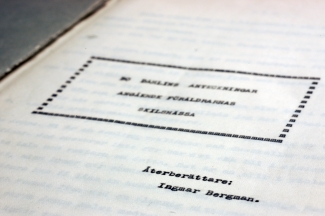 Though directed by Alf Sjöberg, the film was advertised as a Bergman piece. The student had surpassed the teacher.

In the full title, we see one of Bergman’s favourite artistic quirks, namely his penchant for self-reference: “Bo Dahlin’s Notes Concerning his Parents’ Divorce – As Told to Ingmar Bergman.” The first version of this story appears in Bergman’s very first writings, and would finally culminate in the film adaptation a few years later.