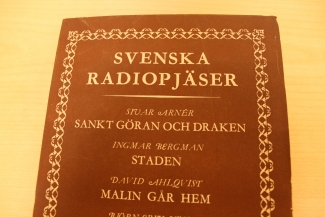 Joakim had been an oft-recurring character; the world-weary bon vivant:

I’ve drowned myself in women, in religious ecstasy, and in my belief in a so-called artistic practice, but it’s all been for naught. My hardship has only increased. So now, I’ve decided to give up altogether. My last will and testament is written, the declaration of bankruptcy has been signed.

The City on stage