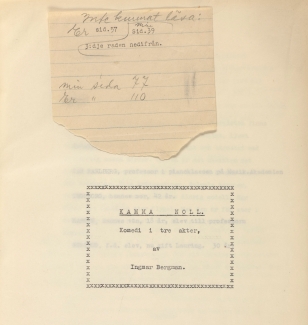 The play is a three-act triangle comedy, set in the Stockholm archipelago, with a married couple, their daughter and her boyfriend and a femme fatale from the city, whose arrival sets in motion a nasty intrigue. The comedy designation seems somewhat stretched and was probably dictated by the play's happy ending.

The play was first staged in Helsingborg by Lars-Levi Laestadius and shortly afterwards the author himself directed the play for radio.

Typewritten script. Not digitized: Photo copy of script with a few alterations (not IB) + photo copy of theatre programme.