Bergman produced a near replica of his 1964 Royal Dramatic Theatre staging in London, with an unfortunate Maggie Smith in the leading role. 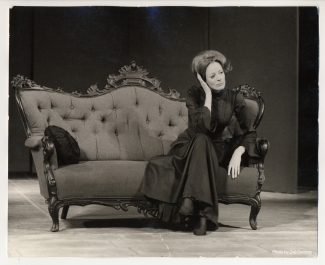 'Hedda in London was not a good production. All the rehearsals were plagued. I despise London.'
Ingmar Bergman

This was Bergman's first production outside Scandinavia. In England, Bergman met actors with a different rehearsal routine than in Scandinavia. 'Their professionalism and speed frightened me a little. [...] They had learned their lines by the first rehearsal. As soon as they had the scenery, they started acting at a fast tempo. I asked to slow down a little and they loyally tried to, but it bewildered them'.

A number of reviews sensed a mismatch between director and actress, and complained about the icy coldness of Bergman's vision of Hedda's surrounding.