The Hour-Glass/The Pot of Broth 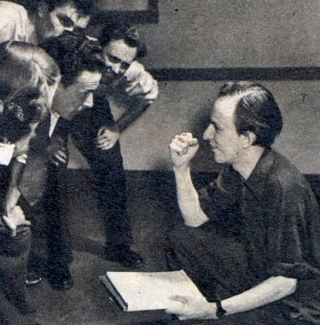 'The motive and dramaturgy in these pieces are similar to others Bergman has previously immersed himself in: Outward Bound, The Hangman and The Man Who Lived Twice; an idealised continuity of existential issues regarding religious, ethereal beauty."

This double bill was presented as programme III on Mäster Olofsgården's Experimental Stage. This was the last production of the 1938-40 theatre season.

Bergman summed up the year as a good one, filled with calm and intense work, and concludes that both critics and the general public seem to have been satisfied. He reports that the financial situation, though not ideal, had not stalled theatre activity, which had included five full-evening productions and three entertainment programmes: The Crazier, the Better, Professor Putnam's Panoptikon and Pyramus and Thisbe. In addition, the amateur team had studied practically all of Strindberg's dramas containing pantomime exercises, and met for film showings and discussions.