The script for one of a total of nine commercials Bergman made for Bris soap that "kills bacteria". 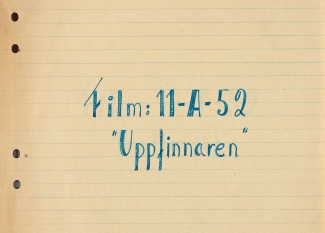 In 1951 there was a conflict in the Swedish film industry. The production companies had declared a ban on filming in protest against the high rate of tax on entertainment.  In order to earn any income whatsoever that year, he agreed to write and direct nine commercial for Bris soap on behalf of Swedish Unilever.