It Was Only a Pleasure!

Bergman explains the background to Scenes From a Marriage before the premiere of the TV miniseries. 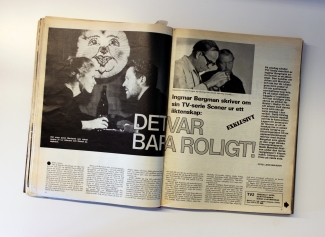 “It took two and a half months to write these scenes, but it took a lifetime to be able to conceive them.”

A longer excerpt from the article:

It may be imprudent to be so straightforward, but it was only a pleasure to write about Johan and Marianne. It all began with the third scene: I wanted to write a theatre play about a man who comes home to his unsuspecting wife and tells her that he is breaking up their relatively amicable marriage, in order to leave her for another woman. When I started writing, I started wondering how they’d had it before – if their marriage had really been as good as the two had always maintained. I also started to speculate about what would happen to them later on.

I had made two earlier attempts of this kind, The Lie and The Touch. They were well-received by some, which encouraged me to continue in the same direction, as both plays were about people and problems which were recognisable without much effort.

Others chastised me properly, and recommended that I return to my cinematographic laboratory. They raged over the banality (which was intentional), they complained about the sentimentality (which was not), and had much to say about the excessively trivial dialogue (also intentional). “There’s just no pleasing some people,” as my great-grandmother used to say. This phrase has always given me confidence, both as a constant in my life, as well as perfectly encapsulating my artistic maxim: I am eager to hear what people think, even though I don’t care a whit.

To my surprise, this is possibly the first time that I have seen two people take shape who don’t speak with my voice at all. Though I should note: it took two and a half months to write these scenes, but it took a lifetime to be able to conceive them. Nevertheless, I don’t feel any kinship to Johan and Marianne. They stand completely independent of their origins. Though, we do have a few things in common: for example, our bourgeois upbringing, with its double-edged influence on our character development (that sounds good, right?).

Both are furthermore academics, something which should hardly burden them, and life is good, in that they live in a house, own their own cars and are both employed. In addition, they’re both used to expressing themselves, which means that they say the right things or are wiser or more straightforward than most people.

It would be wrong here to not talk about the collaboration with the actors Liv Ullmann and Erland Josephson. Their contribution was priceless, as they never abandoned Marianne or Johan, but defended them. In this way, Liv and Erland’s wishes about the dialogue and scenery’s form had a decisive effect on the final product.

One good example of this is Marianne’s story about her relationship to another man in the sixth scene. Liv took a disliking to the passage, holding that Marianne was not at all free and mature as a person, as I’d meant for her to be. Liv then gave the story a deep inner turmoil and uncertainty, giving the scene a deeper sense of consequence and reliability.

Erland, himself a dramatist, helped me time after time with wording that was insufficiently nuanced and far too porous.

Lucky is the director who gets to work with such actors.