Jack Among the Actors

Bergman's first published drama, having previously failed in his attempt to have it staged at various theatres. 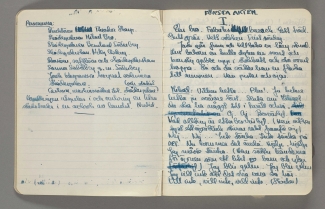 Jack is an expressionistic play in two acts, concerning a troupe of actors who are under the strange control of the director, a fiendish, God-like figure. According to Henrik Sjögren in Lek och raseri, the play was performed a single time in 1953, at Lund’s Lilla Teatern under the direction of Eric Heed. However, the play is usually considered to be unperformed.

Naturally, Bergman wastes no time in establishing the setting of the theatre, which would remain a favourite.

Mikael: I’ve been at this theatre for forty years. Forty years, you hear? And yet, by all that’s holy, I’ve never seen, heard, or even smelled him, not once – and yet I know he’s here! It’s as if he’s always present. Always, every second.

Mikael: You can meet the whole gang then. Make acquaintances. Like my wife. (Laughs.) She’s a real head-turner. She’ll be all pale and dainty, with her big dark eyes and her yellow dress, and I’ll say: “Corporal Jack Kasparsson, may I have the pleasure of presenting my wife, the famous actress Nelly Ostery, whose bounteous curves are the bower of every man’s sweatiest dreams, the incorrigible tramp I happen to be married to. Love her! Hate her!

Jack: You all seem a rather droll lot.

Nelly: Are we now?

Jack: It’s like you’re wound up, you just go on and on.

Jack: It’s as if nothing concerned you, like you don’t take anything seriously at all.

Nelly: What’s there to take seriously? All the world’s a stage, you know.

Jack: You can’t be serious.

Nelly: No? Oh, ask my husband, then. He can tell you more than I can, and if there’s one thing he loves, it’s talking.

Mikael (screams, casts the pistol aside): No, I don’t want to! I can’t stand this anymore. All you people sitting out there – can you hear me? We don’t have much time. Pretty soon we won’t be able to do anything at all. Don’t you understand that we’re people too? We’re meant to live, to love and help each other. We have to think – we have to try to understand! (The curtain has dropped. A few of the actors have come in and try to take Mikael away, but he resists, and continues to yell.) Don’t just sit there staring like idiots. Get out of here! Go home and start over. Pray to God. That’s the only thing we have left. The only thing. The only thing! We have to love each other; we have to help – Do you hear me? Do you hear me? We’re going to die, and then it’s too late. “Jesus loves me, this I know, for the Bible tells me so…” and oh Lord, does my head hurt. God damn it!

Mikael: Listen to me now and listen good. If the director offers you a job at the theatre, say no. If Nelly tries to sleep with you, say no. (Jack and Nelly exchange a glance. Jack gulps, perplexed.) Listen to me! Go back to the military. I’m sorry that I’ve dragged you into this mess. Ugh. I can’t talk properly, with my chin pointing northwest. (Pause.) Ignore what I was yelling at the audience. I was drunk. And I just can’t, can’t, can’t can’t help, I just can’t help but hate this person who’s sitting here and insists on holding – my – hand. (Pause.) It’s funny, isn’t it? Bernhard, who can only play the noble father, now that he’s too old to be the young lover!

Bernhard (rises): Dear Jack. You’re one of us now. You now belong to the chosen few, set to till the earth of the spirit so that the playwright’s seeds may be sown. You have taken on an august duty, requiring the strictest discipline and the utmost humility. You can’t just wander onstage and belt out a few arias, just like that – no, my friend, it’s humility that will put you in your place, as a part of the unit called the ensemble. Humility, remember that word: it is an actor’s first and only virtue. He should be as humble as a little dandelion, gazing up into the life-giving rays of the spotlight, modest in his attempt to find that pearl, as we call the great art of casting before swine. Yes, dearest Jack – never forget that theatre is the greatest, the deepest of all the arts, for it draws the waters of human truth from the sweetest longings of the heart and the darkest depths of the soul, and it is with humility that you should listen to the voice within which speaks to you, tells you where you will find that pearl, that which lies at the end of the artist’s perilous journey, and indeed gives it meaning. Brother! For I wish to call you just that: you may now live your life in the world of acting, the world of theatre. Never forget what your old friend Bernhard Söderberg said to you as you first trod upon the treacherous field of the arts: Humility, said your old friend. Humility, he cried. Let me be the slave in your triumph procession – no, let me be your brother, your friend, your helping hand, indeed the very hand with which I, Bernhard Söderberg, now raise a glass to my brother, my colleague, my young apprentice Jack Kasparsson – let all of us now come together in a toast for my young friend Jack Kasparsson. Cheers!

Jack: What a queer thing this all is. There lies Mikael out there: his soul knows everything about the things he was so worried about. And over there lie thousands of other dead people, and their souls also know something. So why can’t we ever know anything? Why should we have to go on like this? Where is God? Why is he hiding from us, and why doesn’t he ever say anything?

The Director (friendly): Ahem. Ah, yes, it’s me, the director. Teodor Skarp. See now, I’m not so scary. Like a little mouse, I am. An ugly one. Don’t you think I’m ugly? It’s on account of my being so mean… that’s why my face is full of bumps and warts. But I’m not dangerous! Hello, Jack.

(Bows. He extends his hand. Jack clasps it and bows in return.)

The mad director is on the loose, as you see. Checking up on his dear old theatre, as it goes to hell in a handbasket. Oh well. It’s been a wonderful plaything. Truly delightful. An object of great value to me.

Jack Among the Actors on stage