Bergman's production of P O Enquist's play on the artist's circumstances and relationship to his/her surroundings was met with a lukewarm reception. 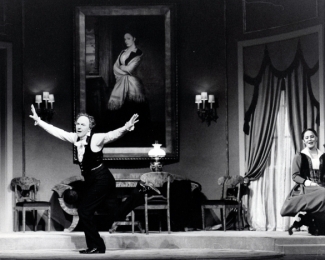 Reviewers of the Munich production of From the Life of the Rain Worms harshly criticized Enquist's play about a ficticious meeting between two Proletarian artist, the 19th-century Danish actress Johanne Heiberg and fairy tale author Hans Christian Andersen. Writing it off as a set of 'terrible trivialities', 'a clever conversation piece without munch dramatic tension', and 'a series of confession monologues', the critical consensus was that had it not been for Bergman turning a banal piece into brilliant theatre, the play would not have been worth seeing. The opening night audience seemed pleased enough, though, giving standing ovations to Bergman and the ensemble during a dozen curtain calls.