Bergman stages a classic in lack of finding a newly written quality drama for children. 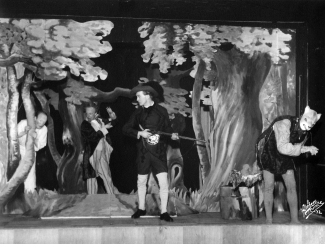 'Little Red Riding Hood was a skilfully composed children's play, the best I have seen in the genre.'
Guido Valentin, Stockholms-Tidningen

For here it is a question of composing in a way that is simple and clear, exciting and funny, short and colourful. It's not just a matter of having a prince and a princess, a king and a queen, a troll etc, and mixing the whole thing. If anything, it is a matter of having dramatic imaginatio

Bergman referred to the play as a A Ghost Sonata for children, and he both translated and adapted the Robert Bürkner adaptation of the Grimm Brothers' fairy tale. The reviewers thought that the acting was weak, but that the direction helped it along. They were delighted by both Karin Lannby's Mother and the young actress Gittan Söderlund, who played Little Red Riding Hood.

During the intermission, the audience was entertained by singing well known children's songs along with the ensemble.

The production went on the road during the summer of 1943 and was a great success, seen by 24,936 spectators.

Sagoteatern had a real evening of success. Ingmar Bergman presented us with a wonderful performance. Here is an inventive, resourceful, young director, and with this play he found the perfect platform - this is how children's theatre should look - even spicing up the roles.

The most positive reviews came from the audience, pupils told by their teachers to write about their views on the performance. Most of them were overwhelmed, but some were disappointed about the lack of realism, for example the fact that the wolf walked on two legs and not four, and that the bucket used by Mother to do her washing was empty.