The making of film

This essay outlines the practical and ethical aspects of being a serious filmmaker. 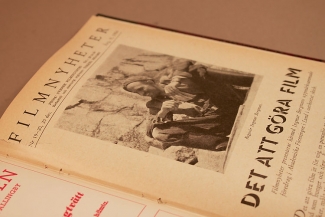 'When I show a film I am guilty of deceit.'

Excerpts from the article:

Film-making is a very part of me. It is a driving force like hunger, thirst. Some people express themselves by writing books, painting pictures, climbing mountains, beating their children or dancing samba. I express myself by making films.

The great Jean Cocteau has written in The Blood of a Poet about his alter ego staging along a nightmarish hotel corridor, where behind all the different doors lie what has made him what he is. Without having the unique qualities of Cocteau, I am going to attempt to convey you to the workshop where I make my films. I must apologise if the visit does not come up to expectations. The workshop is at present quite a mess as the owner is too busy to keep it tidy. Moreover, the lighting is pretty bad in certain places, and some rooms we will not enter at all - these have PRIVATE in large letters on the doors - and your guide is rather unsure as he does not know what will be of interest to you.

However, let us take a look behind some of the doors. This does not mean that we will find what we are looking for, but the search may possibly provide some odd pieces for that peculiar jig-saw puzzle of film-making.

Even today I remind myself with childish excitement that I am really a conjurer, as cinematography is based on deception of the human eye, which because of the rapid is incapable of separating rather similar pictures.

I have worked it out that if I see a film which has a running-time of one hour, I sit through twenty-seven minutes of complete darkness. When I show a film I am guilty of deceit. I am using an apparatus which is constructed to take advantage of a certain human weakness, an apparatus with which I can sway my audience in a highly emotional manner - to laugh, scream with fright, smile, believe in fairy stories, become indignant, be shocked, be charmed, be carried away or perhaps yawn with boredom. Thus I am either an imposter or, in the case where the audience I swilling to be taken in, a conjurer. I perform conjuring tricks with conjuring apparatus so expensive and so wonderful that any performer in history would have given anything to own or to make use of it.

My films involve good craftsmanship. I am conscientious, industrious and extremely careful. I do my work for everyday purposes and not for eternity; and my pride is the pride of a good craftsman.

Yet I know that what I tell myself is self-deception and an incessant anxiety calls out to me: What have you done that will endure? Is there a single metre in any one of your films that will mean something for the future, one single line, one single situation that is completely and absolutely real?

And with the sincere person's deep-rooted inclination to lie I must answer; I do not know, but I think so.

I have never seen it anywhere that a film director shall be happy, contended and have peace of mind. Nobody has said that one should not break barriers tilt at windmills, fire rockets to the moon, have visions, play with dynamite or make mincemeat of oneself. Why shouldn't one frighten the film's producer? To be frightened goes with film-making, so they will be paid in their own coin.

Regardless of my own beliefs and my own doubts, which are completely without importance in this connection, it is my opinion that art lost its creative urge the moment it was separated from worship. It severed the umbilical cord and lives its own sterile life, generating and degeneration itself. The individual has become the highest form and greatest bane of artistic creation. Creative unity and humble anonymity are forgotten and buried relics without significance or meaning. The smallest cuts and moral pains of the ego are examined under the microscope as if they were of eternal importance.

Thus we finally gather in one large pen, where we stand and bleat about our loneliness without listening to each other and without realising that we are smothering each other to death. The individualists stare into each other's eyes and yet deny the existence of each other, and cry out into the darkness without once receiving the healing power of communal happiness. We are so affected by our own walking in circles, so limited by our own anxiety that we can no longer distinguish between the true and the false, between the gangster's ideas and pure ideals.

If thus I am asked what I should like to be the general purpose for my films, I would reply that I want to be one of the artists in the cathedral on the great plain. I want to make a dragon's head, an angel or a devil - or perhaps a saint - out of stone. It does not matter which, it is the feeling of contentment that matters. Regardless whether I believe or not, regardless whether I am a Christian or not, I play my part at the collective building or cathedral. For I am an artist and a craftsman; and I know how to chisel stone into faces and figures.

I never need to concern myself about present opinion or the judgement of the posterity. I am a name which has not been recorded anywhere and which will disappear when I myself disappear; but a little part of me will live on in the triumphant masterwork of the anonymous craftsmen. A dragon, a devil, or perhaps a saint, it does not matter which.

Originally given as a presentation at Lund University on 25 November 1954, this essay was also presented as a radio talk in a slightly altered form on 17 April 1955, and reprinted under the title 'The dilemma of filmmaking' in Hörde ni?, No. 5, May 1955.