Unfilmed script taking place in a film studio, centred around a married couple (the husband an actor, the wife a dancer) whose marriage is falling apart. 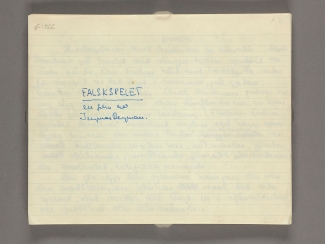 The screenplay was completed in 1956, but in the wake of the catastrophic filming of Smiles of a Summer Night, Bergman decided to put the project on hold. Its only public impact was as a magazine serial published twelve years later.

Alex Andersen, the actor, cannot sleep. The time is 3 o’clock at night, according to the clock ticking audibly on the wooden nightstand. Otherwise, silence. Axel Andersen tosses and turns, but to no avail. The clock ticks away, his heart beats, the darkness pressing against his eyes, while an army of insects, caterpillars and butterflies mill about under his skin in never-ceasing, feather-light torture.