Bergman took one of his favourite plays to Copenhagen for a guest performance, which was even broadcast on Danish TV. 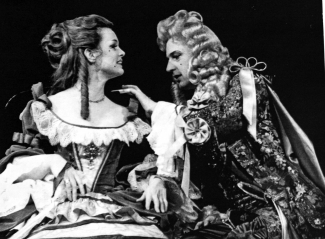 'It's difficult to explain why I love The Misanthrope. Isn't it true that when a man can explain precisely why he loves a woman, he has already stopped loving her? What if there is a misanthrope within me?'
Ingmar Bergman

In his Copenhagen The Misanthrope, Bergman maintained a dual approach. On the one hand, a production of Molière's play as a theatrical game performed in style and intellectually conceived; on the other hand, an exposure, through physical and psychological intensity, of the emotional tragedy in which Alceste and Celemine are both victims.

Expectations were high prior to Bergman's production of The Misanthrope. A reviewer wrote, 'For the first time Molière's connection to the Danish stage is intercepted by a director whose forte is physiological tragedy, Strindberg over Holberg'.

Many reviews had expected Bergman to put his very personal stamp on the production. Instead they experienced 'a clean Molière' and were struck by Bergman's faithfulness to the original mise-en-scene and to the classical rhythm of Molière's text.