“A passion play,” reads the subtitle. 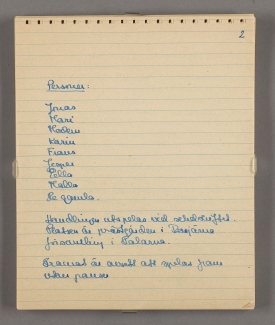 Though Bergman had previously guest-directed another play at the Malmö City Theatre, this was his debut after becoming officially employed as director.

I saw how the fish floated upside down, their bloated bellies pressed against the water’s surface. I saw how adders slithered over the ground, their fangs dripping with venom. Then I saw the fields, how the crops stood blackened, how the pox-stricken livestock devoured themselves, their sores streaming with pus and blood. And then I saw things resembling humans, their bodies oozing with lust as they cursed each other, how the women were pregnant, how they birthed forth bits and pieces of children - heads, hands, bodies, feet - all living, all squirming about for an instant only to be swallowed up by the blasted earth, swollen with the stinking breath of the dead.

Handwritten script.  Dated: Stockholm, 13 April 1951 + Envelope with writing "Note! Danger. Note! This envelope must not be opened by anyone".

Murder at Barjärna on stage