Notes on The City 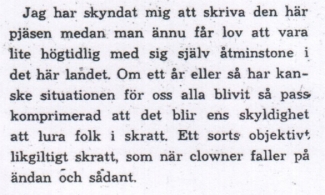 “His only real problem was his fear of darkness, which could strike even in broad daylight.”

Bergman’s article in Röster i Radio, written just before the premiere of his radio play The City.

My first note regarding The City reads accordingly: if I peer deep inside myself into the black bag of the spirit, fastened like a bird’s nest about the visceral nerves, I can hear the whistling, clicking and clacking of small machines. This must be the sound of biology itself. Once my eyes have adjusted to the darkness, I begin to see a series of pictures, weak at first but with increasing strength, with curiously sharp contours, separated from each other by fine little frames. Vibrating through these pictures (which depict everything, limitlessly, uncomfortably) is the pressure of the future or that which has immediately occurred, a sort of radar in the belly which can bring upon indigestion and discomfort in the solar plexus.

Sometimes, these sensations of light, sound, and touch coalesce into explicitly concrete situations. It is on these occasions that writing may become necessary, unpleasant but beneficial. Unpleasant, as well. But always healthy, at least for the writer.

Next note: I see myself as an unbelievably tiny being standing in this central junction of the psyche, which has suddenly taken on the appearance of a heavily trafficked intersection in some large and grimy French industrial city. The city itself is located on the right bank of a river, with the factories and closed-down mines on the left. It’s a sweltering summer night just before a storm, with heat lightning over the roofs of the city as people scurry about.

I decide to go out and explore my surroundings. But in order to not place myself in danger, since I have many enemies among the inhabitants of this city, I have called myself Joakim Naken. With this disguise, I can experience strange occurrences from the present, the past and the future.

Note during writing: before Joakim turned eight years of age, his life was twilight: vital, growing, but with a merciless, unrelenting feeling that the world was a place without grace. This was of course a frightening prospect, though it never gave way to panic. In other words, Joakim had never had any illusions about the authorities or himself, and his only real problem was his fear of darkness, which could strike even in broad daylight. Where this fear came from, or what it actually represented was something that Joakim was never able to figure out. Even so, he met it with a certain fatalism, without feelings of guilt. But the eighth year of Joakim’s life would see the beginning of a turmoil that would last a full twenty-three years. Seen from the outside, this turmoil would have appeared as a huge cloud knotted with a mass arms and legs belonging to Joakim and other more or less involved parties. The litany of curses, prayers and other utterances to be heard from within gave witness to the utter confusion of the man locked in struggle inside.

Final note: that he believes the cloud to have dissipated and the conflict to be temporarily over is a delusion perhaps greater than all the others. In any case, something here has been carried out, and has been corrupted. Occasionally there comes a compulsion to count bodies and assets, one’s own disgraces and those of others, lies, truths.

In a year, our situation may have become so dire that it becomes an obligation to trick people into laughing. A sort of detached, apathetic laughter, like when clowns fall on their bottoms.

The article can be read in its entirety (in Swedish) at sverigesradio.se.

Röster i Radio, No 19, 1951, p.7. This article has also been published in its entirety at sverigesradio.se.