A heretofore unknown little gem (we discovered its two pages when they fell out of an album of newspaper clippings saved by Bergman’s parents). 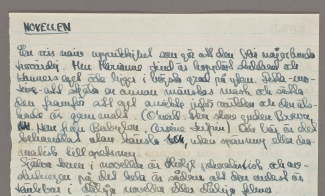 “There is a certain naïve directness that makes it somewhat believable.”

The fragment is undated, so the year is an estimation.

At first glance, this piece appears to be a review of a novel received by Bergman during his time as script editor at SF. However, a closer reading suggests that it is instead a parody of the job itself, penned by a bored young Bergman with aspirations far beyond toiling away on someone else’s scripts.

The editor (i.e. Bergman) is quite critical of the submitted novel: for example, the character Marianne is a “hopeless portrayal.” But some praise is forthcoming as well, such as in the (likely fabricated) description of his discussion with the head of SF’s scripts department, Stina Bergman:

Mrs. Bergman asked: Why do you like the book? I answered: Because, consciously or not, it attempts to portray a naked humanity.

The greatest irony here is twofold: first, that the theme of the ostensible novel is one of Bergman’s own personal favourites; and second, that the editor is so keenly critical of that very motif:

This trope of stealing another person’s mask and wearing it before the world and one’s beloved is hardly new. (See: O’Neill’s The Great God Brown; Hem från Babylon; Arsène Lupin). Yet here it’s treated without emotion, without excitement or dramatic weight.

Handwritten script draft. Undated. Most likely a parody of the job as script editor at SF sent to the head of SF’s scripts department, Stina Bergman.