Rachel and the Cinema Doorman: A Play in Three Acts

One of Bergman’s few early plays to be both published and performed. 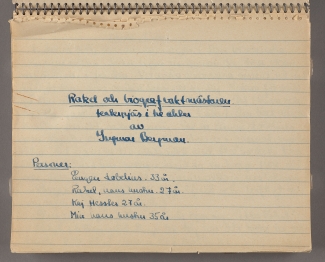 The play is a Strindbergian marital drama centred around the theme of jealousy, and was performed under Bergman's direction.

After I struck you, Rachel, I took myself outside, dead set on killing myself. I figured that was my only way out of this whole mess. But as it happened, I had a sudden change of heart. It would've been too painless to end it all that way. Too painless for you, I mean. For I can tell you that in my dreams, I’ve murdered you both, one after the other. Or sometimes I only kill one of you, warmed by the thought of the survivor having to live with the consequences.

Typewritten script. Not digitized: 1 undated letter from IB to unknown recipient. 1 script with letter dated 1951-06-21 from KDT to IB.

Rachel and the Cinema Doorman on stage