This guest appearance at Norrköping-Linköping City Theatre of Tennessee Williams' play about Sicilian immigrants was the only Williams' piece with a happy ending. 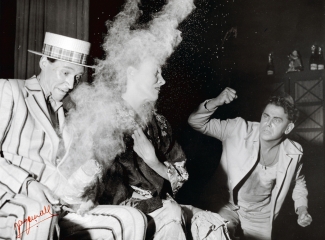 In 1951, Bergman's play The Rose Tattoo was produced as a comedy in Copenhagen and as a sombre tragedy in Gothenburg. When he guest-directed the play at Norrköping-Linköping City Theatre, he approached it as a farce and altered both the opening and the ending of the original text. Even more drastically, he cut out the crowd scenes depicting an Italian-American scenario.

The performance was re-staged the following summer.

The reviews clearly suggest that he had difficulty creating a cohesive performance with a dominant leading lady and a group of actors with whom he had never worked before.