Possibly Bergman's greatest essay, in which he explains his doubts of cinema and art in general. 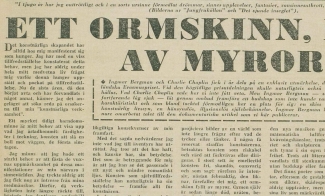 'Even though I, and many with me, find Westerns more stimulating than Antonioni or Bergman.'

This essay was originally written as a speech for the Erasmus Award cermonies in Amsterdam in the spring of 1965, which Bergman did not attend because of illness.

Artistic creativity has always manifested itself in me as a sort of hunger. I have observed this need in myself with some gratification, but I have never in all my conscious life asked why this hunger should arise and demand to be satisfied. In the last few years, as it has begun to ease off, and been transformed into something else, I have begun to feel it important to try to establish the reason for my 'artistic activity'.

It was fairly obvious that the cinema should be my chosen means of expression. I made myself understood in a language that by-passed words, which I lacked; music, which I have never mastered; and painting, which left me unmoved. Suddenly, I had the possibility of corresponding with the world around me in a language that is literally spoken from soul to soul, in terms that avoid control by the intellect in a manner almost voluptuous.

I threw myself into my medium with all the dammed-up hunger of my childhood and for twenty years, in a sort of rage, I have communicated dreams, sensual experiences, fantasies, outbursts of madness, neuroses, the convulsions of faith, and downright lies. My hunger has been continuously renewed, money, fame and success have been the astonishing, but basically unimportant, consequences of my advance. By this, I do not wish to discount whatever I may have achieved. I believe it has had, and perhaps still has, its importance. What is so comforting to me is that I can see what has passed in a new and less romantic light. Art as self-satisfaction can have its importance  particularly to the artist himself.

Today the situation is less complicated, less interesting, and above all less glamorous.

Literature, painting, music, the cinema, the theatre beget and give birth to themselves. New mutations and combinations emerge and are destroyed; seen fro the outside, the movement possesses a nervous vitality  the magnificent zeal of artists to project, for themselves and an increasingly distracted public, pictures of a world that no longer asks what they think or believe. On a few preserves artists are punished, artists regarded as dangerous and worth stifling or steering. By and large, however, art is free, shameless, irresponsible and, as I said, the movement is intense, almost feverish; it resembles, it seems to me, a snakeskin full of ants. The snake itself is long since dead, eaten out from within, deprived of its poison; but the skin moves, filled with busy life.

If I now observe that I happen to be one of these ants, then I must ask myself whether there is any reason to pursue the activity further. The answer is yes. Even though I regard the theatre as an old and well-beloved courtesan who has seen better days. Even though I, and many with me, find Westerns more stimulating than Antonioni or Bergman. Even though the new music gives us feelings of suffocation, from the mathematical thinning out of the air; even though painting and sculpture have been sterilized and waste away in paralysing freedom. Even though literature has been transformed into a mere cairn of words, with no message and no danger.

In the same way, I believe that people today can reject the theatre, since they live in the midst of a drama which is constantly exploding in local tragedy. They need no music, since their hearing is bombarded every minute by great hurricanes of sound, in which the pain barrier is both reached and surpassed. They need no poetry, since the new world philosophy has transformed them into creatures of function, bound to interesting  but poetically unusable  problems of metabolism.

Man (as I experience myself and the world around me) has set himself free, fearfully, breathtakingly free. Religion and art are kept alive for sentimental reasons, as a conventional courtesy to the past, or in benevolent concern for the increasingly nervous citizens of leisure.

I am still declaring my subjective view. I hope and am convinced that others have a more balanced and allegedly objective view. If now I take all these unfortunate factors into consideration and assert that in spite of everything I wish to continue making art, it is for one very simple reason. (I will disregard any purely material considerations.)

This reason is curiosity. An unbounded, never satisfied, continuously renewed, unbearable curiosity, which drives me forward, never leaves me in peace, and completely replaces my hunger for fellowship.

I feel like a prisoner who has served a long sentence and suddenly tumbled out into the booming, howling, snorting world outside. I am seized by an intractable curiosity. I note, I observe, I have my eyes with me, everything is unreal, fantastic, frightening, or ridiculous. I capture a flying particle of dust, perhaps it's a film  and of what importance will that be: none whatsoever, but I myself find it interesting, so it's a film. I revolve with objects I have captured for myself and am cheerfully or melancholically occupied. I elbow my way in with the other ants, we do a colossal job. The snakeskin moves.

This and this only is my truth. I don't ask that it should be true for anyone else and, as comfort for eternity, it is naturally on the slim side. As a basis for artistic activity during the next few years it is entirely adequate, at least for me.

To be an artist for one's own sake is not always very agreeable. But it has one outstanding advantage: the artist is on an equal footing with every other creature who also exists solely for his own sake. Taken together, we are probably a fairly large brotherhood who exist in this way in selfish fellowship on the warm, dirty earth, under a cold and empty sky."

Expressen (1 August 1965). Translated into English, French, Italian, Spanish and other languages, and released in a number of publications and countries.