The Tale of the Eiffel Tower

Novella with modernist overtones in which the Eiffel Tower comes to life and lumbers off from the Champs des Mars. 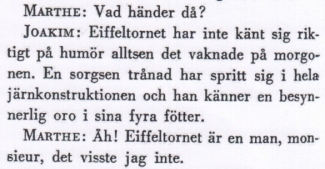 This excerpt from Joakim Naken was published in BLM with the following summary: “This scene is from Ingmar Bergman’s as yet unperformed play Joakim Naken. The plot unfolds in Lyon at the turn of the century, where Joakim works as a director in one of the world’s first cinematographic studios. Burdened by personal and artistic difficulties, he changes places with another person and now lives incognito in a boarding room. Here, he speaks with the hostess’ daughter, Marthe.”

Joakim: I’ve been looking at this painting of the Paris Exposition.

Marthe: Oh, that one!

Joakim: Have you ever seen a cinematograph?

Joakim: They’re like moving paintings, project on a white screen.

Marthe: So you could make a moving painting of Mother, when she goes and buys tomatoes which are playing cellos…

Joakim: - or of Marthe, standing in the tub and washing herself. Completely naked in the sunshine. Anything is possible.