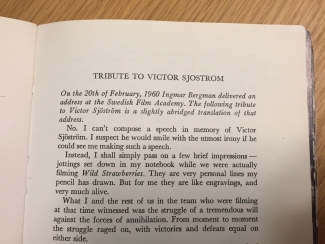 This text about the recently diseased Victor Sjöström, originally published in Swedish magazine Folket i Bild, was translated and published in Sight & Sound the same year.

No, I can't compose a speech in memory of Victor Sjöström. I suspect he would smile with the utmost irony if he could see me making such a speech.

Instead, I shall simply pass on a few brief impressions, jottings set down in my notebook while we were actually filming Wild Strawberries. They are very personal lines my pencil has drawn. But for me they are like engravings, and very much alive.'

A third jotting from my diary:

‘We have shot our final supplementary scenes of Wild Strawberries – the final close-ups of Isak Borg as he is brought to clarity and reconciliation. His face shone with secretive light, as if reflected from another reality. His features became suddenly mild, almost effete. His look was open, smiling, tender.

’It was a miracle.

‘Then complete stilness – peace and clarity of soul. Never before or since have I experienced a face so noble and liberated.’

’Yet it was all nothing more than a piece of acting in a dirty studio. And acting it had to be. This exceedingly shy human being would never have shown us lookers-on this deeply buried treasure of sensitive purity, if it had not been in a piece of acting; in simulation….

’In the presence of this face I recalled the final words of Strindberg’s last drama The Great Highway: the prayer to a god somewhere in the darkness.

”Bless me, Thy humanity
That suffers, suffers from Thy gift of life!”
Me first, who most have suffered –
Suffered most the pain of not being what I most would be.'