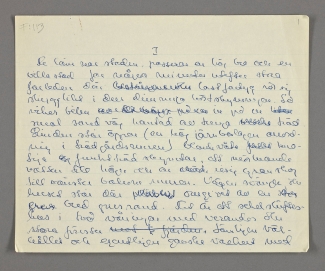 This small fragment can be found in the workbook for The Silence, but doesn’t seem to be related. While the draft seems to have been an unrealised idea, David Egermann bears a certain similarity to Elis Vergérus in The Passion of Anna, though he’s even more of a monster. See for yourself:

David: I was talking about my hobbies. Maybe I’ve said too much (or too little).

David: Not exactly. I would say I collect a certain kind of film. (Smiles) My own recordings. Want to take a peek?

Miriam Makeba’s gentle voice can be heard in the silence. Abel looks at his friend, curious.

Abel: You’ve certainly piqued my interest, I’ll admit as much. What do you have to show me?

David opens the door to an adjoining room which is filled from floor to ceiling with film canisters in all different sizes, marked with letters and numbers. A large table with an index cabinet stands in the centre of the room. David leafs through the index cards, then takes a canister down from a shelf and enters the adjoining room, where he turns on the projector and amplifier. After loading the film, he returns and takes a seat in an armchair.

David leans forward and pushes a button on a control panel. The lights dim and the projector starts to roll.

A woman appears onscreen, agitatedly moving about in a sparsely furnished, brightly lit room. In a bed in the middle of the floor, there lies a four-month old baby, who screams constantly. The woman gives the impression of utter desperation. She picks up the infant and holds it against her body. It keeps on wailing. She lays down on the bed, letting the baby rest by her breast, but the crying continues. She stands up, leaving the child on the bed.

Transition – a message appears that [unreadable] hours have passed; the time is now two o’clock in the morning. The woman is sitting with her head in her hands, wrapped in the comforter. The infant is still crying, shrill and terrible. Utter stillness.

Transition. Two hours have passed and the time is now four in the morning. The woman stands bent over the child, and screams a few inarticulate words herself, before retreating to a corner of the room where she sits on the floor, eyes flashing and white. Her face is contorted with fear. The baby cries.

Transition. The time is now eight in the morning. Another four hours have passed. The woman picks up the wailing infant and hurls it against the wall. Her face is blank with unthinking fury. The child screams, convulsing on the floor. The woman stomps on the shrieking bundle again and again, until the screaming suddenly becomes a muted gurgling. The woman’s face registers the abrupt silence. She seats herself on the bed, hands pressed against her stomach, her mouth agape.

Transition. One hour later. The woman [unreadable], deeply and worriedly.

The film ends. The lights go on. The projector stops.

David and Abel look at each other for a moment.

Abel: Who was the actress?

David: Actress? That was no actress.

Abel: But what in the hell…

David: What you’ve just seen is an authentic recording of an infanticide. It was made with specially-constructed closed-circuit cameras over a certain period of time. The crucial parts were transferred to film.

Abel: But who recorded this?

David: I did. Oh, don’t get so upset. The child would have died anyway. It had a brain tumour. It took ages to find the right woman. But then it so happened that I came into contact with a kind and warm-hearted person who agreed to take on the child. She moved here – that is, to my laboratory. Then, my cameras observed her over two months’ time. This is only the final catastrophe. I have several thousand meters of film of her with the child. Gripping stuff, I can tell you. Incidentally, she doesn’t remember anything. I have told her that the child died while she was sleeping, which she accepted as truth.

Abel: But why? For what purpose?

David: I’ll tell you. I study human behaviour: faces, reactions, tone of voice. In my laboratory, I can artificially produce the most exquisite distillates of the psyche. I observe, I catalogue. Over time, it’s become a comprehensive work. Tens of thousands of pages. A treatise on the human face, with explicit visual documentation.