Bergman takes on Chekhov for the second time, while the German critics remain sceptical. 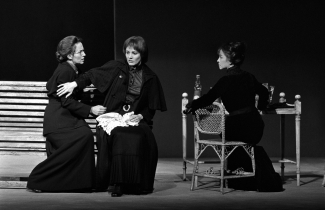 'What was expected to be a sensation turned out to be a solid, unimaginative presentation of a celebrated theatrical piece, almost entirely without surprises. The only sensation was the lack of sensations.'
Benjamin Henrichs

The Three Sisters' production remained very faithful to Chekhov's play text. In an interview prior to the opening, Bergman declared that his ensemble would play Three Sisters like a Mozart symphony, movement by movement, with no subjective directorial interpretations of the text, but rather like an objective following of a musical score.

Some reviewers found Bergman's musical reference misleading, claiming that following a musical score was no more objective than analysing a dramatic text.

Several reviews suggested that Bergman did not have an ear for the German language and would probably never have accepted, in his native Swedish, such unnatural cadences in the dialogue as appeared in his production.