Article in the programme for Miss Julie. 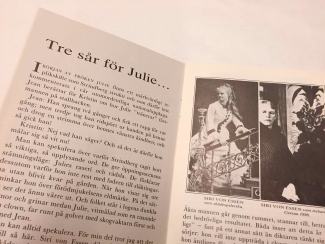 As with the version of Julie he’d staged in Munich a few years before, Bergman supplemented this production with a passage present in Strindberg’s original script, but omitted from the first performance, which Bergman had discovered in the recently released national compilation of Strindberg’s complete works. In the opening scene, Jean recounts for Kristin how Julie has “trained” her fiancé to jump over her riding crop:

Jean: He made two hops, and got a lash each time for his trouble; but the third time, he snatched the riding crop from her hand and opened up a cut on her left cheekbone; and then he just left!

Kristin: Can that be? Why, that must be the reason she’s made herself all up in white!

Bergman also saw to it that Julie was made up in white “like a furious little clown,” with a red lash visible on her left cheek. Bergman concludes his little essay thusly:

The fact remains: Julie is a clearly injured little bird, flapping clumsily into what is for her highly dangerous territory, Kristin’s kitchen. She receives another bleeding wound in the cruel game with Jean. The third wound, her slit throat, is but a consequence of the preceding two.