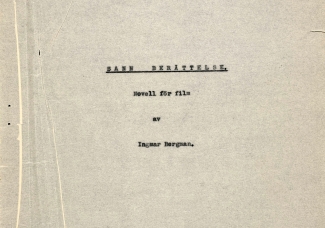 Unfilmed script with a somewhat (in retrospect) inaccurate title.

The script was never made into a film, despite Bergman's apparent ambition:

Yet another attempt at finding a form for The Very Cheap Film: the film in which we can afford to experiment freely, in the relatively secure feeling that the repercussions (should there be any) needn't be disasterous.

It was however re-written and resulted in the script Prison.