Carl-Gustaf Kruuse, ballet manager of Malmö City Theatre, played the leading role as Bergman helped with the script as well as direction in his only ballet production. 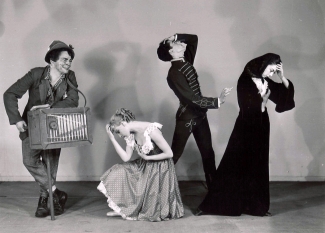 'Forty minutes of uncomplicated pleasure, an appeal to the audience to play along.'
From the programme note

Twilight Games is a ballet presented in four tableaux, with music by Ingvar Wieslander. As the coreographer Carl-Gustaf Kruuse would be playing the leading role, he asked Bergman to help out with the script and direction.

The first tableau takes place at Haga Castle, with Kruuse assuming the role of Swedish King Gustav III. In the second, Bellman and his muse Ulla Winbladh take centre stage, whilst the third focusses on a pair of well-worn ballet shoes. The final tableau starts off in the printing press of Elvira Madigan and Count Lieutenant Sparre.