Writing in capacity of theatre manager in the programme for his production of Jacobowsky and the Colonel, Bergman articulates a heartfelt wish list concerning the future of theatre. 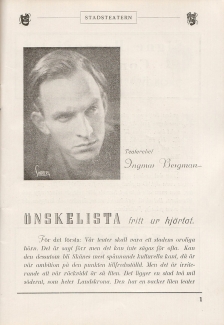 “I realize this all may come across as pretentious - unbearable, even – but if you’re going to write a wish list, then let it come straight from the heart.”

The young director’s audacity would take him far.

First: Our theatre should be a house of infamy. I’ve said it before, but I’ll say it again: we will only be satisfied if our theatre becomes Scania’s most exciting cultural edifice. It’s unacceptable that our reach is so small. There’s a city twenty kilometres to the south called Landskrona, with a beautiful little theatre, replete with green balconies. We’d like to perform there, too, if only there was an audience: they don’t care about theatre. They don’t need it. The story is the same in Höganäs and almost anywhere else you look. Though on second thought, we do have one audience: children. Which is good, and something we should focus on, resources allowing.

Second: Our theatre should be – must be - a young theatre. It should be a fertile soil, where seeds can take root and flourish into unknown and unexpected forms. It should sprout, vegetate, bursting with vital new growth. It should be in constant motion, in flux.

Third: Our theatre should be a proving grounds for our capacity for self-critique. At some point, every artist feels that they possess a singular genius, though only a few will admit it. At this theatre, the most important thing is that we are able to fail, and fail again, and above all that we are never allowed to succeed to the point that (in our own eyes) we ascend to some untouchable higher plane. I can think of more than a few examples here, but I won’t name names.

Fourth: Our theatre should be a playground. I’ve brought this up before, only to be greeted by mutters about self-discipline. Of course self-discipline is important – and a necessity if we are to keep our grand ship afloat, away from the shoals of disaster. I realize this all may come across as pretentious - unbearable, even – but if you’re going to write a wish list, then let it come straight from the heart.

Fifth: I’ve been thinking about the risks involved in us moving into a newly-built facility. As far as I know, no modern architect has ever succeeded in building a comfortable and pleasant theatre. Dramaten’s Studio was supposed to be, but there’s something not quite right about that place. A theatre shouldn’t look like a cinema; it can’t look like a boxing arena or a conference centre. It should look like a theatre: painted curtains, white, red and gold; well- worn stage floors; proscenium seating; draughts coming up between the floorboards; and the wonderful, mysterious scent of a stately old theatre filling the air. That’s why I’m very worried about the plans for a new theatre. Better to fix up the old one! I could go on – especially now with the autumn season about to begin, our ambitions feel boundless.

Sixth: Laughter, jokes, warmth and humour are all critical elements, now more than ever. They should be given plenty of room at our theatre. A young theatre is often eager to deal in the lurid and gruesome, perhaps because it’s so horrible to be young. But we should be careful. Making people cheerful and carefree is always more rewarding than making them unhappy and pensive. Talk of “theatre of struggle” may sound impressive, but it’s not often clear what the struggle is for or against. Usually, such a struggle only succeeds in destroying all traces of levity. I’ve been involved with this kind of theatre in the past, so I speak from experience. However, theatre that struggles against things like melancholy, tedium, greyness -succeeding if but for a few hours out of the evening – that’s the kind of theatre we’re interested in.

Some may find such a task to be trivial in comparison to the sizeable grant that we’ve received. But if we can get even a handful of people every night to forget their worries, if only temporarily, I maintain that it is money well-spent.