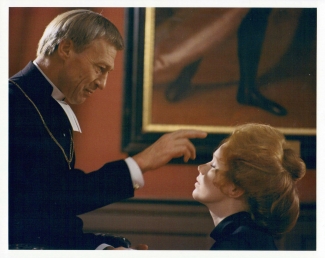 Under an an empty, cruel sky

Filmmakers as widely diverse as Carl Theodor Dreyer, Robert Bresson, Alfred Hitchcock, Eric Rohmer, Martin Scorsese and Lars von Trier share at least one thing in common: they are all religious, and this shows through in their films. Interestingly enough, all of the above are Catholics, with the exception of Dreyer, a protestant like Ingmar Bergman. Yet unlike the deeply devout Dreyer, Ingmar Bergman has often aired his doubts about the existence of God both in his films and elsewhere, earning him the epithet "the protestant atheist".

It would, however, be going too far to call Bergman a non-believer. This is hardly the place for a detailed theological analysis of Bergman's films, not least since the subject has already been covered in countless books, theses, articles and seminars. However, the facts are briefly this: the son of a clergyman, Bergman grew up in a high-church household. Many of his films deal with religious questions, and his film titles The Seventh Seal, Through a Glass Darkly and Face to Face, are direct quotations from the Bible.

Bergman's early films paint a fairly bleak picture. There appears to be no salvation, either in this world or in any other. Moreover, direct references to religion or those who practise it are relatively uncommon in the director's films of the 40s and early 50s. If they do appear, they often take the form of ironical portraits of bigoted, introverted people tortured by the conflict between the lusts of the flesh and their own spiritual needs. A typical example is Henrik in Smiles of a Summer Night, a young man studying to become a clergyman, who displays certain similarities with the young Bergman himself (or possibly his notion of how his father might have been as a young man).

It was with The Seventh Seal that Ingmar Bergman first became the cinema's religious philosopher par excellence. A world-weary knight on his way home from the Crusades travels through a country beset by the plague where he meets, quite literally, death. The knight's skills as a chess player win him temporary reprieve from his inevitable fate, and he uses this time to save a young family from the plague. In brief précis, the theological problems presented in the film are not particularly sophisticated, but rather somewhat naive. The "childish piety" (to use Bergman's own words) that in certain ways permeates The Seventh Seal would hardly offer a key to explain the film's colossal status or the innumerable theological studies it has spawned. Compared, for example, with Robert Bresson's (in this respect) considerably more sophisticated films from the same period, one might almost call into question the enormous excitement that The Seventh Seal managed to generate. The explanation must lie in something other than the food for thought offered by the film.

The Seventh Seal may well have become such a 'religious' classic through the stark confidence of its presentation. The personification of Death, with his white face and black cape (something that Bergman later could hardly believe he had dared in all seriousness to introduce) is perhaps so deeply affecting through the sheer force of its naivety. In spite of the many subsequent parodies, Bengt Ekerot's Death in The Seventh Seal is still one of the most powerful creations in the history of the cinema.

It was during the 1960s that Bergman's penchant for religious philosophy came to the forefront. Yet the seeds of what was to come were undoubtedly present in The Seventh Seal. As Bergman puts it in Images: My Life in Film:

I still held on to some of the withered remains of my childish piety. I had until then held a totally naïve idea of what one would call a preternatural salvation. My present conviction manifested itself during this time. I believe a human being carries his or her own holiness, with lies within the realm of the earth; there are no otherworldly explanations. So in the film lives a remnant of my honest, childist piety lying peacefully alongside a harsh and rational perception of reality.

His 'present conviction' of a world without God in which human beings carry their own holiness sums up his own religious credo. But how can such a view be reconciled? Can one believe in anything holy without God? The contradictory label "protestant atheist" does indeed appear to have some substance. It would be incorrect to describe Bergman as non-religious. He does maintain a faith of some, as manifested in films like Through a Glass Darkly or Winter Light and to a certain extent in The Silence, Persona, A Passion, Cries and Whispers and Fanny and Alexander.

Through a Glass Darkly is the first film in what has been called a 'trilogy on the silence of God'. In the film, Karin has a religious revelation which can, however, be rationally explained (she has been diagnosed as psychotic). This encounter with God is a horrifying experience: he appears to her as a hideous spider. Thus far Through a Glass Darkly Såsom i en spegel appears to be a renunciation of the remnants of piety Bergman retained in The Seventh Seal. If God does exist, then he is merely an illusion conjured up by a sick individual, and even then he is not in any respect good.

The ending of the film, which, despite coming across as something of a bogus afterthought, contains a line of thinking that Bergman would return to later, and one which appears important to him. When Karin has been taken to hospital following her (presumed) breakdown, her father and younger brother start talking together, clearly for the first time in ages, perhaps for the first time ever. When the brother declares that it is impossible to believe in God, the father replies in the style of a preacher that love – "love of all kinds" – is proof of God's existence.

St. John's assertion that 'God is Love' is echoed by St Paul in his First Epistle to the Corinthians, from which the title of the film is taken. The assertion can be comprehended in reverse: if God is absent, or silent, it is because there is no love - without love, no God. A variation on the same theological theme is the subject of Bergman's next film Winter Light, one which he would later develop in more subtle ways in The Silence and Persona.

The clergyman beset by doubt in Winter Light, (the name Tomas is almost too obvious a reference for anyone who knows their Bible), has lost his faith following the death of his wife. His liturgical duties are reduced to empty rituals and the pastoral care he offers to members of his congregation takes the form of inept introspection: instead of helping the depressed Jonas Persson, Tomas virtually drives him to suicide with his cynical egoism. When people cannot engage, or even try to understand each other, God is absent. The talkative school teacher Märta, in love with Tomas, sees it as her obligation to free him from his unhappy state. Ironically enough, one might think, since she does not believe in God and he is a member of the clergy: it ought to be the other way round. And yet it does seem that she or something at least  succeeds. When Jonas Persson's death confronts Tomas with the ultimate proof of his own inadequacy, and after he has explained to Märta just how sick and tired he is of her attentions, something clearly happens to him. The seemingly childlike, yet ultimately profound, thoughts about Christ of the churchwarden Algot Frövik also seem to play a part in this process.

In the final scene of the film Tomas is about to hold a service. But since nobody believes in God any more, only Märta has turned up, and according to the cantor, she "doesn't count". Tomas has the flu and a high temperature, the cantor wants to go home and the churchwarden wonders whether he should ring the church bells, or whether the service will be called off. In his only decisive action of the film, Tomas declares that the service will indeed go ahead. The bells ring out, and the film ends with a close-up of Tomas addressing the empty pews: "Holy, holy, holy is the Lord God Almighty. Heaven and earth are filled with his glory."

This is a very Bergmanesque ending, far more satisfying than the ending of Through a Glass Darkly. But how should we interpret it? Given what has happened – a much-loved father and husband has killed himself, and Tomas has behaved appallingly towards Märta – the closing lines seem deeply ironical. Where is the glory of which Tomas speaks? Yet on the other hand, the new expression on Tomas' face might appear to announce that now, and for the first time, he actually believes what he is saying.

Bergman is not a man of the cloth: he does not set out to bring us to salvation through faith. He is hardly a believer himself, in any traditional sense. In one of his increasingly rare public appearances, at the Ingmar Bergman Week in Fårösund in July 2005, the eighty-seven year-old, yet obviously sprightly, Bergman was drawn into a discussion with the Bishop of Visby, Lennart Koskinen, who had been invited along to talk about the religious themes in Through a Glass Darkly. "Bishop Koskinen," Bergman called out from his seat in the audience, "do you believe in God?" Koskinen replied that he did indeed, and unsurprisingly Bergman was asked the same question by another member of the audience. He answered that he was totally convinced that he would see his last wife once again (- Ingrid, now deceased), and that "Christ is a philosopher who gives testimony to the existence of other worlds. Just as Bach does."

Of the ending of Winter Light, Bergman has remarked:

"He goes through with his service for no other reason than that Märta Lundberg is present. If one has religion faith, one could say that God has spoken to him. If one does not believe in God, one might prefer to say that Märta Lundberg and Algot Frövik are two people who help raise a fellow human being who has fallen and is digging his wn grave. At that point it doesn't matter if God is silent or if he is speaking." (Images)

The Silence, Persona, A Passion, Cries and Whispers and Scenes from a Marriage all reveal a similar pattern to Winter Light. A handful of people close to one another, often a couple, do terrible things to each other, abuse each other physically or psychologically. They live, as Bergman puts it in such an ingeniously paradoxical way in his essay The Snakeskin, within a "selfish community". Because regardless of their despicable treatment of each other they remain mutually dependent. They cannot cope by themselves. These characters' only hope of salvation lies in those rare moments of contact, of humanity, of love itself. Ingmar Bergman's view of morality might perhaps be summarised in these terms. It is a morality which – irrespective of whether he believes, or we believe, or not – is, in essence, profoundly Christian.