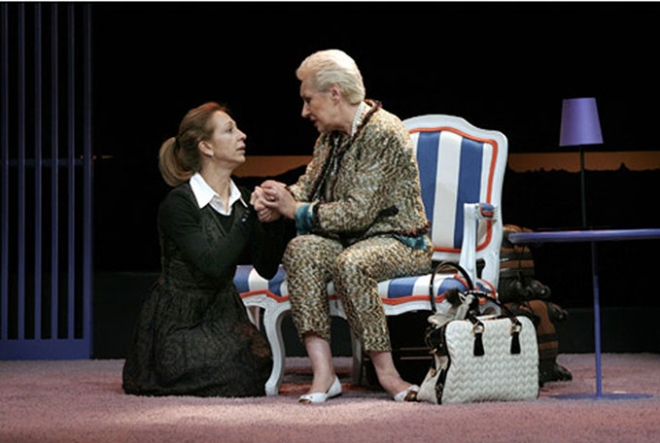 We compared the Swedish original text, the 1978 edition, with the film. We did a few cuts but we were not as radical as Bergman."
Fernanda Lapa

"In creating this Sonata we had an enormous respect for Bergman's genius, the author who so marvellously created a fascinating gallery of female characters, but we are aware that, as Liv Ullmann stated, if the pianist had been the father, there would not have been a story!
We compared the Swedish original text, the 1978 edition, with the film. We did a few cuts but we were not as radical as Bergman."
- Fernanda Lapa

Read the whole interview with her and Cucha Carvalheiro, here.

The following interview with directors Fernanda Lapa and Cucha Carvalheiro was conducted in 2007 by the ingmarbergman.se staff.

Fernanda Lapa (FL): The first time I saw Autumn Sonata was back in 1979 at a Warsaw Film Festival. I was there at the time practising for directors at several Polish theatres. I've never forgotten those two women since then ? the complexity of their characters and their great acting.
I was young and didn't have the means to direct it. Almost 30 years later, at last, I've been able to do it. I find the text hasn't aged at all and I've approached it as a classic.

You have choosen to split the direction of the play between you, which is not very common. Why is that and how has the work been divided?

Cucha Carvalheiro (CC): As Fernanda was going to perform in the play, the production needed an outside eye to coordinate the work. We've known each other for a long time, therefore it was easy for us to share and agree on the main issues that this project was trying to achieve.

FL: Faced with the decision of staging Autumn Sonata in a co-production of my Group Escola de Mulheres with São Luíz Teatro Municipal (the most important of Lisbon's City Theatres), I was divided between directing it or playing the mother's role. In the end the enormous ambition of doing both prevailed. I invited Cucha Carvalheiro, companion of many years of theatre activity, to co-direct it with me. I asked her to give special attention to the acting. Her understanding of creating a character, role playing, firmness and sharp eye were decisive for the final result of rigorous acting, as Charlotte comments in the play ? there is an abyss between sentiments and sentimentalism.

With António Lagarto, set and costume designer, we decided upon a space of "an interior landscape, simultaneously an interior and a landscape". The child's universe is given by a doll's house and a miniature piano and train, which ? in the foreground, downstage, create different levels of perception of the space and of experiencing it. The distant torn and "operatic" horizon slowly opening up allowing an enlightening light, transforms this interior landscape into the resonance of the cave encircled by the passing of the toy-train on the opposite side (the foreground), vanishing (off stage) into the darkness (from the text for the program by António Lagarto). In the final rehearsals, Cucha and António took the lead specially concerning the lighting which played a very important role in creating ambiances and meanings. The accuracy of lighting and sound cues is of extreme importance for the rhythm of the length of the play ? 1h 55m.

CC: No. Both Fernanda and Marta are very professional in their work. If affected, it was in a positive way, because sometimes they shared with the group some private jokes between mother and daughter that released the deep ambiance which the text conveys.

FL: Marta Lapa has been with Escola de Mulheres for the last 12 years. She is a dancer and choreographer and she has collaborated in several productions of the Group either as choreographer, director's assistant, actress or even directing theatre/dance. We are used to working together and our relationship besides our feelings is a professional one. Marta has achieved in creating the role of Helena with great veracity and simplicity which makes me feel very proud of her.

Your theatre company, Escola de Mulheres is a feministic oriented company. In what way?

FL: Since it was created in 1995 Escola de Mulheres has had and still has as its main aim to confront the public with texts of quality and polemical themes related to womanhood. We have privileged texts written by women, revealing in Portugal, Caryl Churchill, Paula Vogel, Timberlake Wertenbaker etc., and produced as well texts by male authors who don't approach womanhood from a stereotype point of view. Amongst others we have used texts by Eurípides, Brian Friel, Yannis Ritsos and now Bergman.

Have you chosen to make some alternations/shortenings of the text?

FL: In creating this Sonata we had an enormous respect for Bergman's genius, the author who so marvellously created a fascinating gallery of female characters, but we are aware that, as Liv Ullmann stated, if the pianist had been the father, there would not have been a story!
We compared the Swedish original text, the 1978 edition, with the film. We did a few cuts but we were not as radical as Bergman.

What is, according to you, the most central theme of the text? What is it about?

FL: For me the main theme in Sonata is the "loveless tragedy" ? those who have not been loved in childhood most probably will never have the chance to learn how to love. I also feel the myth of "motherly instinct" is questioned in this play. As a matter of fact, the text was understood as a classical tragedy. The action takes place over a full day, with prologue, agon and epiphany. We can consider Victor as the ancient chorus and Helena as the victim who with tragic irony is the solely one for whom love is total and without restraint.

Is there something in your production that you have made different from Ingmar Bergman's film?

CC: Theatre is theatre, cinema is cinema. We tried to create a theatrical language for the set and also for the actors who inhabit the play with no set changes in a large proscenium-arch theater that seats 700 punters. Almost everything in our production is different, except the text and, of course, the characters

FL: Only once we watched the film again, when we worked on the translation of the text and its final cuts with Jonas Omberg, a Swedish living in Portugal who is stage director at Centro Cultural de Belém in Lisbon. We purposefully tried to forget the film itself, because cinema is another medium with its own proper language very different from theatre. Besides, as creators ourselves and Latin interpreters we have another culture and way of expressing our feelings. In one scene only we have followed Bergman's wish when Charlotte lies on the floor, according to the author "all pianists have back aches" and in psychoanalysis all patients lie on the couch?!

Music is of course of great importance to the play, which music
are you using?

FL: The musical selection was done by Nuno Vieira de Almeida, a classical musician and well known Portuguese pianist. He plays on the recorded two versions of the Prelude No.2 in A minor by Chopin used in the show. Following a cared analysis of the dramaturgy of scenes he selected the following works which are used at different stages of the play. The complete list of the music used is: