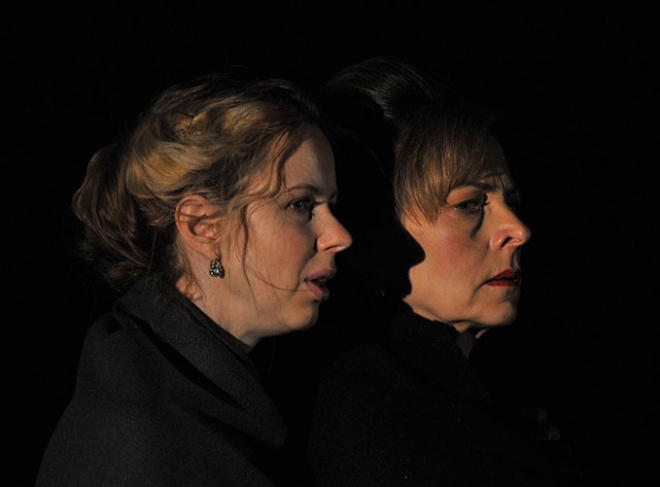 "In Bergman's scripts nothing is actually black-and-white. Deep behind the facade the characters and their motives are as varicoloured as autumn landscape. Autumn Sonata is not an exception in that sense and who could be better to paint this landscape than Priit Pedajas, master of creating distinctive atmosphere?"
Tiiu Laks, Eesti Päevaleht

The actors gained much praise for their contributions, especially Ülle Kaljuste playing the part of Charlotte. In Eesti Päevaleht Tiiu Laks for example wrote "Ülle Kaljuste fits in the character of the self-centred Charlotte so naturally that its even a bit ironic that she is so excellent, especially in the parts of egoistic women. The autumn is still far away, but the sonata touches the soul already."

Kristi Eberhart agreed: "Although neither Bergman nor Pedajas take sides and the actors play all the characters with equal understanding and empathy, the sympathy inclines towards the vital Charlotte (Ülle Kaljuste) who just wasn't the family type, who choose music, freedom and self-fulfilment instead of the role of mother and wife."

Maria Avdjushko who plays the part of Eva also acted in Essti Drama Theatre's production of Scenes from a Marriage where she doubled in the parts of Katarina and Mrs Jacobi.

She also emphasized the performance of the other actors as well as the set designer: "The designer Reet Aus has created a symbolic, out-of-time space, which influences senses and state of mind and gives the actors the chance to achieve great performances. Ülle Kaljuste, as the charming, contradictory and vital mother and Maria Avdjushko, as the sensitive and vulnerable Eva, both use this chance. Ain Lutsep as the pastor Viktor inhabits the role of the storyteller who brings ends together in the production: cordial and loving his wife unconditionally, leaving his own personal life backwards, as does Charlotte's other daughter, the sick Helena in the warm-hearted and moderately appalling presentation of Britta Vahur."

Maria Avdjushko playing the part of Eva also acted in Eesti Drama Theatre's production of Scenes from a Marriage where she doubled in the parts of Katarina and Mrs Jacobi.

Eesti Ekspress' Madli Pesti wrote: "Autumn Sonata is high-level actor's theatre and fits ideally to Estonian Drama Theatre, where traditional text-based theatre is dominant. Autumn Sonata's company of actors succeeds in this 'text presentation theatre' style in a both touching and enthralling way, although you can not expect therapy (which probably could be said about Bergman's film in it's time)."

In addition Pesto pointed out the production's stage design and costume: "Reet Aus' design is remarkably good: minimalist black stage where the actors can get maximum space and where fortunately no manor house interior is built in. There are some chairs, a carpet, and paintings on the stage. In one corner there is a black concert piano, in another corner there are red branches in a black vase. The actors wear black clothes most of the time, which they have been given good reason for. When Kaljuste appears in an extremely effective red dress the costumes give important accent in portraying the mind of the characters. Kaljuste wears the same dress on the magnificent poster and program cover photo. It doesn't happen so often that the poster depicts the atmosphere of the production so precisely – a lonely distinguished woman alone with the great piano on a big empty stage."