Home to 2.5 inhabitants, Munich is Germany's third largest city. As the capital of Bavaria, it boasts the world-famous Oktoberfest as well as being home to football team FC Bayern. 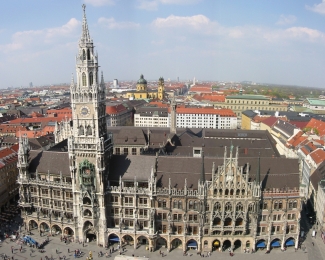 Ingmar Bergman lived in Munich from 1976 to 1982 due to his embroilment in an infamous tax scandal. His relationship to his adopted hometown can be best summed up in his own words:

On the 14th of June this year, I was granted permission to live and work in your country. On the 15th of September, I began filming my first film outside of Sweden at Bavaria Film Studios. From mid-February, I will begin rehearsals of Strindberg's The Dream Play at Munich's Rezidensteatern. And today I receive Frankfurt's Goethe Prize, a mark of achievement which has both deeply moved and stunned me. I am 58 years old, a debutant within a cultural community which has both directly and indirectly proven to have a powerful effect on my development as a human being and as an artist. I come from a country which I love, a country I never imagined I would leave, at least not against my own will. Just as my exile externally appears to be voluntary, internally it has been an irrecusable duress.

Bergman staged 11 plays during his time at the Munich Residenztheater. He also directed two films in Germany.