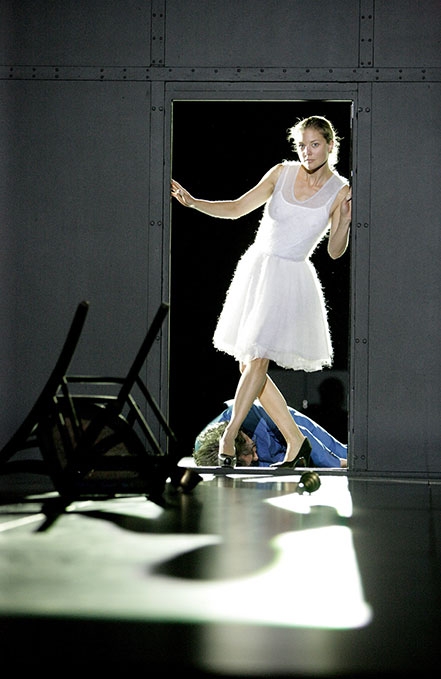 World stage premiere of Winter Light by German theatre at Norwegian Ibsen Theatre Festival. The play constituted the first part of Matthäuspassion, a trilogy about Western Man and his relation to Christianity. Therese Bjørneboe of Klassekampen called it 'pretentious enough. But liberatingly naïve and brave.'

The second part in the triology is Ibsen's Brand, also the reason why the opening found its way to Oslo. The third part is based on the three last chapters of the St. Matthew Passion together with Bach's The Gospel according to St. Matthew. Here are also texts by Leo Tolstoy and José Saramago included.

The parts of Tomas and Märta are acted by Berndt Stübner and Cordelia Wege and the director is Sebastian Hartmann, who became theatre director at Centraltheater Leipzig on the date of the Leipzig opening, September 18, 2008.

In her review for the Norwegian Television's cultural news Lisa Kristin Strindberg concluded: 'If the German director Sebastian Hartmann had had the ability to confine himself, this very interesting performance about Christian belief had also become a great experience. For here there are lots of exciting elements. In the first part we find a representative for our time; the fallen priest, no longer a believer in God. And one who has lost his love. Two closely related things. And then the uncompromising believer, Brand.'

Therese Bjørneboe started her review in Klassekampen by describing the stage design: 'It starts with Bergman's Winter Light. The stage is naked, apart from an organ, a coffin and a chair. And on the white iron wall you read the provocative phrase God is with us.'

Bjørneboe concluded her remarks on the Winter Light performance by writing: 'In the interpretation of Hartmann the story is told in a more sarcastic and brutal manner than from what I can remember of Bergman's film. In the same time it creates an impression of the main motifs of the performance. The one revolving around love and the battle of the sexes, and the other, around the Passion of Christ and its fundamental meaning for Christianity, the church and our Western society.'