The Aphorisms of Ingmar Bergman

Bergman’s commandments for filmmaking, grouped under the headings of “The Forbidden,” “The Permitted” and “The Necessary.” 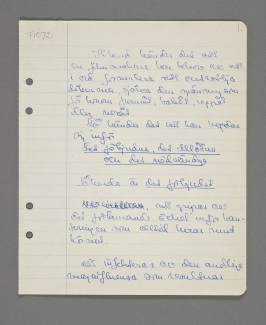 “It is permitted to commit whatever atrocity or artistic act of violence, to tell whatever scandalous lie you can think of, as long as they’re flawlessly seductive.”

Occasionally, a filmmaker must take to word to describe their eternal dilemma, the tension that propels them forward, backwards, up or down.

And when that happens, they find themselves before:

Thus it is forbidden:

To be handicapped by antipathy for the work, which is always lurking around the corner.

To be swaddled up and encased by a suffocating silence, which together with defeatism is always waiting in the wings.

To succumb to the trade’s dangerous enthusiasm for the serious, the brutally banal.

To reach out for the audience’s favour, to swim pleasantly in shallow but lukewarm water, always with a foot safely on the bottom.

To give way to the relatively legitimate temptation to provide for oneself and one’s loved ones.

To take shelter in the watchtower, drawing the ladder up after oneself and issuing reports on events beyond the horizon, reports which defy control by fellow human beings.

It is furthermore forbidden:

To lament the gifts not bestowed by the spirits.

To dance around one’s shortcomings, to howl at the moon.

To hope for eternity, immortality, sudden revaluations or discoveries.

To tell truths (whole, half or quarter), as everyone mucks about with their truth as they see fit (see Fröding).

To lust after another’s film ideas, without making them your own.

To commit whatever atrocity or artistic act of violence, or tell whatever scandalous lie you can think of, as long as they’re flawlessly convincing.

To look upon the art of film with an enthusiastic disdain, paired with respect for a handful of people, who have managed to survive with the purity of body and soul relatively intact.

I believe that it is furthermore permitted to see oneself as a spiritual hot-dog seller, always on hand to provide a bite to eat just when hunger is at its worst. The hot-dog seller’s ambition should be to make sure the hot dog is well-cooked and won’t cause indigestion (too much mustard often ruins the meal).

Finally, it is necessary

To be so industrious that one never has time to think about what is forbidden.

To put out material so diligently that one forgets what is permitted.