Bergman's debut at Gothenburg City Theatre was the world premiere of a play by existentialist playwright Albert Camus. 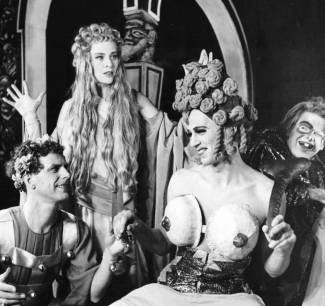 'Ingmar Bergman's directing was nothing less than a renaissance within the dramatic arts in these northern climes.'
David Hallén, Aftonbladet

Albert Camus was a well-known name in Sweden at the time and would receive the Nobel Prize in Literature in 1948.

The Gothenburg City Theatre established a reputation during World War II as a contemporary stage, producing plays of political and social currency. With Hitler's disastrous destiny in fresh memory, many associated Caligula's name with similar tyranny. Bergman himself had used Caligula as a nickname for his portrait of the sadistic Latin teacher in Torment.

Caligula, Bergman's first production at Gothenburg City Theatre premiered on 29 November 1946. The production was a resounding success, not least thanks to its star Anders Ek, who established himself beyond doubt as one of Sweden's most important actors.

In Ek's performance, Caligula was a clown and an acrobat whose hysterical, hiccupping laugh completely dominated the stage.

The production aroused considerable attention in theatre circles, and there were soon proposals for guest performances at the Royal Dramatic Theatre. Discussions took place between the two theatres, yet the proposition proved impossible for various practical and planning-related reasons.

For the occasion French composer Roman Maciejewski created special music using only instruments found in ancient Egypt and justified his choice by the fact that Caligula is said to have harboured a special passion for the Egyptian goodness Isis. But reviews found Maciejewski's music to be closer to French Impressionism, especially Ravel's compositions.

David Hallén, writing in Aftonbladet, began his review by asserting the significance of the theatrical experience he had witnessed. His words sum up the views of many other reviewers:

Yesterday, the City Theatre provided us with great art. Frenchman Albert Camus' Caligula is a considerable work of art, built on the ability of the true dramatist and poet to shape, give life and maintain its direction from the first line to the last. Ingmar Bergman's directing was nothing less than a renaissance of the art of theatre in these northerly climes. He gave his all from beginning to end, played with a full orchestra, painted in garish and expressive colours. He is not afraid to shock. And by way of conclusion, one was able to witness how an actor stepped from a relatively obscure position to a stage sensation of huge proportions. People will be talking loud and long about Anders Ek.

Ebbe Linde in Ny Tid joined those who praised the production, proclaiming that Caligula henceforth would not only go down in history as a man driven to madness by his desire for power. 'Gothenburg and Sweden wrote theatre history yesterday with Caligula, thanks to a great new actor, a new French dramatic genius and a new (for us) important director.'

Anders Ek was an actor with a very personal style which some regarded as disturbing since it seldom corresponded to the naturalistic ideal. Some felt that Ek did not enunciate clearly, that he spoke in an unattractive way and that his acting was far too physical and lively. Yet in Caligula it was precisely these qualities, which had previously been regarded as inappropriate, which were perfectly suited to the portrayal of Caligula's increasingly absurd hunger and the devastating effect this had on Caligula the man. Above all, many commented on how his strong and physical acting was combined with a singular bodily control, worthy of a dancer, and that this combination was an essential part of his ability to express Caligula's complex inner self.

It was, however, no coincidence that Bergman and Ek managed to work so well together. They had known each other for some time, and had worked together both in Stockholm and Malmö. I GT Bergman described their partnership as follows: 'My task was quite simply that of the midwife. When I saw the take that Ek had on the role I simply let him continue, and subsequently I created the framework for the whole thing.'

Anders Ek and Bergman were subsequently to work together many times both in films and the theatre.

Bergman has now had the main stage at his disposal, and he has presented the piece as a surrealistic inferno opera. The play has something of a modern Russian and thoroughly theatrical style. Everything seems planned, from the colonnades, cubes, angles and other geometrical symbols to be found in Carl Johan Ströms carefully constructed and colourful sets, to the blocking so carefully worked out by the director.

In an interview in Aftonbladet after the opening night, Bergman described how fruitful his collaboration with Carl Johan Ström had been, and how thankful he was that Hammarén, the head of the theatre, had not skimped on the costs. To begin with, Bergman had been shy of the main stage, with its revolving stage 'that stretched halfway to Ystad' and thought that the play would be better suited to a smaller stage. 'But it wouldn't have worked, Ek wouldn't have had room on the small stage.'