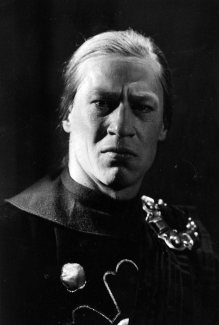 Actor 1916-1979
Intellectual method actor with a unique voice and a strong physical presence. Performed to great acclaim in a number of Bergman's productions at the Gothenburg City Theatre in the late 1940s.

'[...] such originality in the greater role, such derring-do in the minor details, such humor and such utter self-possession!'
Herbert Grevenius, speaking of Ek in his review of Caligula

Anders Ek was born 7 April 1916 in Gothenburg, Sweden, the son of literary and history professor Sverker Ek and his wife, the poet Karin Ek.

After studying acting under Naima Wifstrand, Ek attended the Royal Dramatic Theatre’s acting school between 1938 and 1941. After graduating, for a short time he worked at both the Royal Dramatic Theatre and Wasa Theatre in Finland, where he was expelled due to his involvements with the Socialist Party. Once he returned to Stockholm, he was employed at Per-Axel Branner’s New Theatre between 1942–1944, whilst simultaneously being under contract with Europa Film, where he was cast in his first major film role in 1943 as the troubled student in När ungdomen vaknar.

At the New Theatre, he met dancer and choreographer Birgit Cullberg, whom he married. Cullberg sparked Ek’s interest in pantomime, an art form which would clearly inspire the physical nature of his acting technique. The couple’s three children are all well-known in their own rights. Their sons Niklas and Mats are dancers and choreographers, whilst their daughter Malin (Mats’ twin sister) is a Royal Dramatic Theatre actor who worked with Bergman in his stagings of Woyzeck and A Dream Play.

In 1944 Anders Ek was hired at the newly-opened Malmö City Theatre, where he acted for the first time with Maj-Britt Nilsson in her debut role in Vilhelm Moberg’s Mans kvinna (Man’s Woman). The same year, he was involved with Ingmar Bergman’s staging of The Pelican. He had met Bergman a few years earlier in Stockholm, when he played the leading role in Niels Ebbesen, as well as being cast in two roles in the double-production The Gambling Hall/Mr Sleeman Cometh.

Ek followed Bergman to the Gothenburg City Theatre in 1946, where he had his big breakthrough in Bergman’s production of Caligula.

The odd couple of Bergman-Ek reaped many successes together in Gothenburg, including Macbeth, Bergman’s own play The Day Ends Early and the European premiere of Tennessee Williams’ A Streetcar Named Desire. In 1950 both men moved back to Stockholm and settled in Lorens Marmstedt’s Intima Theatre, where they put on The Three-Penny Opera (with Ek as Peachum) and Jean Anouilh’s Medea. After this, Bergman moved to Malmö and Ek returned to the Royal Dramatic Theatre, where he remained until 1960, when he was hired by the newly-opened Stockholm City Theatre.

In 1960 he played Jean opposite Ingrid Thulin’s Julie in wife Birgit Cullberg’s staging of Strindberg’s Miss Julie. After five years, he returned to the Royal Dramatic Theatre for the third and final time, where he remained until shortly before his death.

Ek’s film career was less voluminous than his career on stage. He acted in 16 films (four with Bergman) over the course of 35 years, and many which are considered classics. His unique style didn’t loan itself to all roles, yet when he was cast in the correct role, he was one-of-a-kind. Two of these are undeniably in roles with Bergman – as the clown Frost in Sawdust and Tinsel and as the pastor Isak in Cries and Whispers. Anders Ek was also Carl Theodor Dreyer’s first choice for the leading role in his only Swedish film Two People, but was rejected by the Swedish Film Industry’s artistic leader Victor Sjöström, as he had an Adam’s apple. The role instead went to the classically handsome Georg Rydeberg. Some of Ek’s non-Bergman roles include the alcoholic painter Elias in Hasse Ekman’s Girl with Hyacinths, who vacillated between artistic genius and blubbering self-pity. He also played the vagabond Bolle in The Road to Klockrike, where he displayed many of his unique faces and physical expressions which played out throughout his entire body. People have spoken of the torment his long, gangly body caused him as he battled it for order. The result was whimsical and unpredictable in many instances. His strained facial muscles could give way to a small spastic impression, but could likewise transform into a smile which was ‘the most wistful and brightest in Sweden’, as written in his obituary.

Anders Ek was one of Sweden’s most headstrong actors, a constant physical force but also an indisputable intellectual role interpreter. As a ‘Stanislavski System actor’, he valued physical labour over naturalism. If, for example, a role required him to be bloody, he demanded to be covered in ox blood, no matter how stale or fresh it may be. Ek han sökte sig färna till teaterns rötter i den primitiva kulten och marknadsgycklet. It is also common knowledge that Ek wished to make the director actually, Det är också vida känt att få regissörer egentligen "rådde på" honom, möjligen en förklaring till att hans filmroller är relativt få.

In the winter of 1976, Ek rehearsed Strindberg’s The Dance of Death at the Royal Dramatic Theatre, with Ingmar Bergman in the director’s seat. Ek was suffering a great deal of pain due to being recently diagnosed with leukaemia, but he refused to pull out of rehearsals. Bergman in The Magic Lantern:

We worked side by side since the early 1940s. We quarrelled with and insulted one another, we reconciled, fought and fought again, separated in fits of anger, repented and started all over again. The Dance of Death was a high point in our work together. [...]

I reluctantly and painfully watched as Anders Ek placed his own fear of death in the Captain. He identified with him. Strindberg’s words gave form to a miserable, somewhat comical hypochondriac, which in Ander’s Ek’s interpretation was transformed into a samurai’s stoic and domineering yet emerging fear. It was gruesome, shameless, desperate – a mockery of the theatre.

One morning, I visited Anders Ek in his dressing room. He was sitting at his make-up table with his hands on the table. His face was grey from lack of sleep and physical pain, set against the hard autumn light. He explained that he had given up, that having to take pain tablet after pain tablet had muddled his better judgment. He realized that he had used his own fear of death to relate to the Captain. With a heavy heart, he blamed me for remaining silent.

Ek acted in his final film role in 1976, where he played himself in Marie-Louise Ekman’s Hello Baby. He passed away on 17 November 1979 in Stockholm.