Cat on a Hot Tin Roof

With this popular work by Tennessee Williams and a star cast, Bergman's production was met with public success. 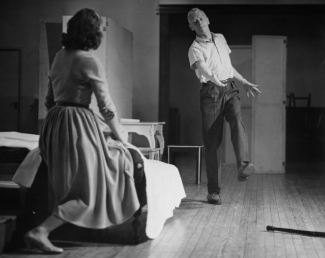 'Ingmar Bergman has proven himself the master of the Large Stage.'
Lars-Levi Læstadius, Director of Malmö City Theatre

Williams' play was presented on four different stages in Sweden in 1956. The most notable features in Bergman's production were his strong focus on the father-son conflict; his interpretation of Brick, the son and husband cripple without any charm; and his total unmasking of all the characters, ending in their complete loss of illusion, without any trace of the happy ending that was presented in the original Broadway production.

In a comparison between the different Swedish productions of Williams' play, Berman's presentation received the most glowing reviews. 'Malmö had a secret weapon: it is Ingmar Bergman. One is vanquished, happy, joyful. The whole performance was strict and feverish, it was a sexual trench war but even more a tragedy of loneliness. As the curtain came down, a great liberated jubilation burst forth from the Malmö audience. With that jubilance one greeted a masterpiece.'