The script for Beppo the Clown, first performed at Sagoteatern and later as a touring Folkpark show. 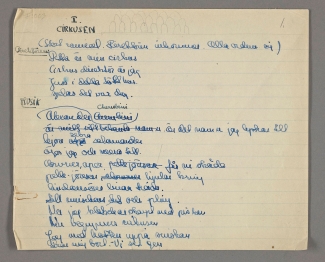 Else Fisher is credited as choreographer in the script, but the nature of her contribution seems to have been more an intimate collaboration between writer and director - and not just because they would later get married. For starters, the entire script was handwritten by Bergman. But regardless of whether it was Bergman’s own work or an adaptation of Fisher’s writing, it’s hardly a literary masterpiece:

The scoundrel shall be found.

When the way is upside-down.

We are two courageous clowns.

And the dirty deeds of Herr Bofvén