The oldest of Bergman's preserved radio plays, Come Up Empty is set in Stockholm's archipelago and is a comical drama triangle involving a married couple, their daughter and her boyfriend, as well as a femme fatale from the city. 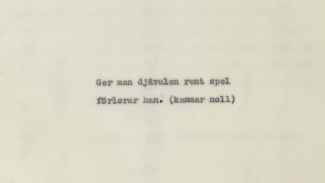 'If you give the Devil fair play, he comes up empty.'
-from the unpublished manuscript

'It is like a light at the end of the tunnel for those of us who have witnessed Ingmar Bergman as he survived his first tumultuous early years, now evolving into an important Swedish dramatist to be reckoned with.'

Bergman wrote Come Up Empty in Helsingborg in the spring of 1948 and revised it with Lars Levi Laestadius in early autumn the same year, by which time he had moved to the Gothenburg City Theatre. Bergman called his play a comedy in three acts, but many reviews referred to Come Up Empty as a morality play and an uplifting Christmas sermon.