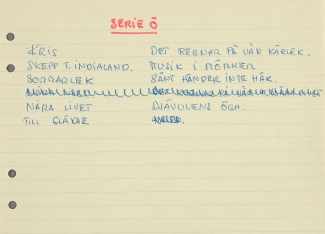 “I suddenly understood the film I should have made instead, and became so ashamed that my appendix became inflamed, I broke a toe and came down with an awful cold.”

In conjunction with a retrospective of his films at the Swedish Cinamateket (“Series A”), Bergman chose a selection of his (in his own eyes) nine worst films (“Series Z”), which were only screened in the smallest theatres. In this little pamphlet, he comments on Crisis, Summer Interlude (which he later reworked) and The Devil’s Eye, among others.

The downside with making a film is that it cannot be disowned – it will always be on record. A bad film can always be blamed on circumstance, but that’s a meagre consolation. A film will without shame or mercy reveal its creator’s weaknesses and shortcomings. What the films in this series have in common is that they have all been embarrassments to me, in one way or another. Those who happen to see these films – on account of schadenfreude, curiosity, masochism or purely academic interest – should however consider the words of Thomas Thorild, namely that nothing is done for the sake of its failures.

Welcome to the small theatre at Filmhuset, Mr. Bergman!

We, the Editorial Board, have followed your request to divide your films in Filmklubben’s programme into Series A (Wednesdays and Sundays in the large theatre) and Series Z (Mondays in the small theatre). However, this does not mean that the Board shares your views on these films. Although, what introduction would be more fitting than Berman on Bergman?

In any event, we would like to express our utmost gratitude for the work you have done in presenting your films for all of the 12,000 members of Filmklubben, who have long accused us of negligence due to our inability to present your complete filmography in an acceptable fashion.

Filmhuset’s small theatre has only 133 seats. We hope that some of your great honesty and self-deprecation will have rubbed off on us.

We also presume to show Bergman’s Series Z in reprise in October-November.