Dancing on the Pier

Bergman had a certain faiblesse for contemporary playwright Björn Erik Höijer and directed his works both on stage and on radio. 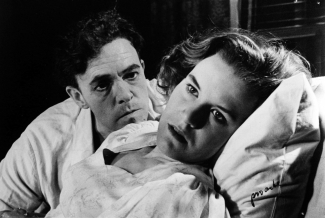 'The art of ending a play does not belong to the ones Björn-Erik Höijer seems to be familiar with: suddenly the lights went out on stage, one feared a short circuit, but it was an act that had ended.'
Kjell Hjern, Göteborgs Handels- och Sjöfartstidning

Höijer's stark and violent vision no doubt appealed to Bergman. There is in fact an interesting parallell between his Höijer drama and Bergman's film Through a glass darkly. Both works are chamber plays with strong moral overtones and both centre around a young woman's destiny, tied to a non-committal and/or parasitical father figure.

The critics did not only question Höijer's abilities as an author for the stage, but sometimes also Bergman's handling of these flaws. Many reviewers had for example hoped that Bergman would help sort out the obscure psychology of the character of Mr Rydén.

Besides the different opinions on Höijer's text, Bergman's direction received much praise, also from one of his most firm critics, Olof Lagercrantz. In his review in Svenska Dagbladet, he among others wrote that Bergman's direction 'showed samples of the boldness and scenic intuition that signifies him as a director'.